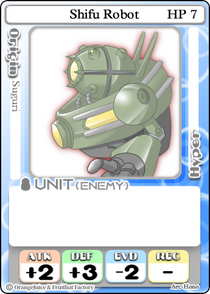 Shifu Robot (シフロボ Shifurobo), boss variant, is one of the bosses on boards in 100% Orange Juice!.

Shifu Robot is the Boss with the highest defense stat in the game. As a boss, it features an increased HP, attack, and defense stat, and a decreased evasion stat compared to its playable counterpart. While it may not be as threatening as other bosses, its high DEF stat means that it is very unlikely to take more than 1 damage at a time, even after using an offensive card. As such, it is only likely to be KO'd when it has already been whittled to 1 HP. Its low HP stat compared to other bosses should ensure that this will not take too long, as long as it is fought frequently.