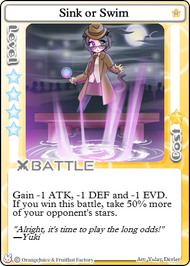 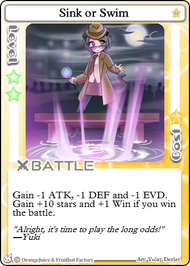 Sink or Swim is a collectible Battle card that can be acquired from the Pudding Pack.

Sink or Swim allows the player to take a massive risk in an attempt to steal more stars from their opponent. Playing this card against an extremely weakened opponent is the easiest way to secure a KO. Characters with extremely high ATK like Tomomo will still be able to have a good chance of hitting EVD based characters and punching though the defenses of tank characters. Kae does not technically lose any ATK from this card, as the DEF penalty gives her an extra +1 ATK to balance it out. Nath's active extension stacks can also negate the penalties of this card, making it a powerful late game tool when combined with the star-hungry

Another Ultimate Weapon. Sweet Breaker can use it in conjunction with

Melting Memories to minimize the effects of the stat reduction and recover the expensive star cost of her hyper. It can even serve as a detrimental battle card for her confused opponents to unwittingly play. Suguri's

Extraordinary Specs can allow a higher chance of KO, due to the enhanced rolls supplementing the loss of stats.

Sink or Swim is an extremely risky card for most characters to even try to play. Characters with 0 or less ATK are at particular risk of having their attack dodged. If the player fails to KO their opponent, they will likely take a lot of damage in the counterattack due to both their DEF and EVD being reduced. Tank characters such as Fernet and Kyoko have a hard time taking out opponents while under the effects of Sink or Swim. Even worse, these characters become extremely vulnerable while at 1 HP, opening them up to an easy Sink or Swim KO by an opponent.