100% Orange Juice Wiki
Register
Don't have an account?
Sign In
Advertisement
in: Level 4 cards, Trap cards, Base pack,
and 4 more 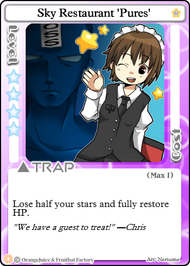 Sky Restaurant 'Pures' is a collectible trap card that can be acquired from the Base Pack.

When triggered, the victim loses half their stars and fully heals HP up to their maximum.

Sky Restaurant 'Pures' is one of the most unusual healing cards in the the game, in that it is as powerful as

Pudding, but carries a secondary effect as deadly as

For the Future of the Toy Store: taking half the player's stars. It is also one of two trap cards that heal, alongside

Brutal Prank, the card's main power lies in that the cost of the health received is essentially neutralized by the high price of receiving it. Given the late Norma level needed to activate the card, it generally will be used toward the end of the game, which can easily have a devastating affect on an opponent near victory. As a result, the card is generally best put to use if placed on an opponent's home.

Evil Mastermind, either by playing it directly from the deck, or playing it from her hand on a random panel. The card can also be used for the player to heal themselves as well if placed on the player's own

Home panel. However, this tactic is only generally viable with Star Breaker, or if the player is only focusing on Wins Norma.

While the card is very powerful, it does possess some weaknesses. The card's main fault comes with its high norma requirement, meaning that it cannot be played until much later in the game, when it may be too late to recover the match. There also are methods to counter the card, though few. For total destruction,

Star-Blasting Light can be used to destroy the card itself and punish the user. However, this card is extremely difficult to use as a result of its high Norma and Star requirements. Another tactic would be using

Crystal Barrier to prevent Sky Restaurant 'Pures' from affecting the player, effectively countering the card. The least expensive tactic is to move the card to another panel using