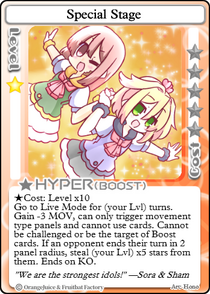 Go to Live Mode for (your Lvl) turns. Gain -3 MOV, can only trigger movement type panels and cannot use cards. Cannot be challenged or be the target of Boost cards. If an opponent ends their turn in 2 panel radius, steal (your Lvl) x5 stars from them. Ends on KO.
Hyper Info
Effect Type
Boost
Level
1
Cost
Level x10 ★
Symbol
[[File:|30px|link=]]
Illustrator
Hono
"We are the strongest idols!" ―Sora & Sham

This effect lasts for a number of chapters equal to the player's level, or until the player is KO'd.

Special Stage is one of the greatest star-stealing cards in the entire game, with the possibility to steal even more stars than

Ubiquitous. However, the card requires careful usage, as the timing of the card's activation will determine how well the card performs. In order to yield the best results from the card, the player will need to activate the card when opponents will be near the player soon. This can be accomplished by activating the card when there are KO'd players recovering nearby, when the player is heading down a path that their opponents must follow to get to their

Home, or by using the Hyper on a compact/commonly crossed section of the board. While the Hyper cannot steal from KO'd players, it is able to do so on the turn they recover. Special Stage is also extremely powerful on small boards such as Vortex where the effect is almost impossible to avoid. The player can also use the card aggressively on larger boards such as White Winter, where the long walk to a player's home panel can force the opponent to walk through the Hyper to avoid missing their norma. In short, the goal of the player will be to steal from the opponent as many times as they can, which can only be accomplished if opponents are already close by at the time of activation. Another great aspect of the Hyper is that it is very easy to make a star profit with the card, as the player only needs to steal 2 times to recover the cost of the card. Better yet, the card is based on the player's level and not the opponent's, which gives the player better control over the card's effect. The player can also take advantage of the invincibility the card provides. For instance, if they wait until norma 4 to activate the Hyper, it will provide full protection from the

Boss panels for 4 turns. This may even give the player the opportunity to KO the boss if the opponents have already faced it multiple times while the player was in Live Mode.

As to be expected, the card is far from perfect. The greatest disadvantage to Special Stage is the timing and luck aspect required to get the card to work well. If the player is particularly unlucky, they may time the Hyper poorly enough that they don't make the cost back. Likewise, if the opponents roll high or use

Dash!, they can easily escape the Hyper's effect. Similarly, cards like

Here and There and field events like Random WarpRandom Warp
Every 5 Chapters, Each players will be warped to a randomly chosen panel at the beginning of the Chapter. can easily enable opponents to escape the Hyper's range. Consequently, the Hyper works very poorly on boards with an abundance of

Warp panels and can be hard to use on boards where the panel spacing and lack of path diversity can make the Hyper difficult to time well, such as Star Circuit. In a different but equally poor scenario, if the player activates the card when they are at 1-2 HP, opponents may follow the player on purpose, accepting the star loss, but waiting for the stocks to run out so that they can KO the player and get their stars and more back.