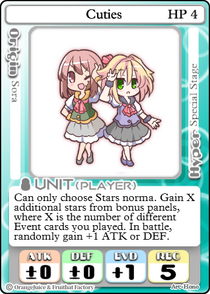 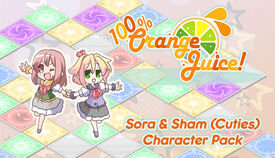 Sora & Sham (Cuties) (ソラ＆シャム（アイドル) Sora & Shamu (Aidoru)), also referred as just Cuties, are one of the playable characters in 100% Orange Juice!. They were added to the game in DLC 21

and are both the first dual-character that does not feature any switch between the two characters, and the first DLC to only feature a single unit. Sora and Sham both originate from the game Sora, where both were close friends.

Ready to perform a live concert with music and dance, the Cuties are the idol version of Sora and Sham, featuring a mix of each other's original stats. A powerful duo, the Cuties feature a below average HP stat of 4, a boosted EVA stat, neutral recovery, and passive that provides a bonus +1 buff to ATK or DEF randomly every battle. As a result, the player will essentially be using either Sora or Sham every combat phase, both of whom are strong characters. This provides the duo with both survivability through a boosted EVA and DEF, and a decent amount of power when they receive extra ATK. Either way, the Cuties benefit greatly by having no negative stats, to compensate for their lackluster HP pool, making them a force to be reckoned with. The duo also has an additional passive, Events Crashed, which enables them to gain additional stars from

Bonus panels for every different event card the player activates. This can be seen as an added benefit for any event cards they like to bring. The stacks of Events Crashed also never deplete, which makes the extra stars from

Bonus panels more beneficial the earlier they are obtained. Their passive being based on event cards is also beneficial, as there are often cheap, low-impact options such as

We Are Waruda to feed the passive with little risk to themselves. The Cuties also feature an extremely powerful Hyper card that, when used correctly, can provide them with mountains of stars, while also protecting them at critical moments.

Boss panels if the player does not receive +1 DEF. Likewise, since the bonus stats are provided at random, they may not give the stat the player needs at the time, such as DEF during an assault, and vice versa. Also, given that the stat boosts are only +1s, they may prove to give extremely exciting results, or barely help at all, depending on the player's luck. The Cuties also are unable to use wins norma which, while better than the alternative situation, can be a problem on boards like Tomomo's Abyss, where combat and wins often plays a big role.