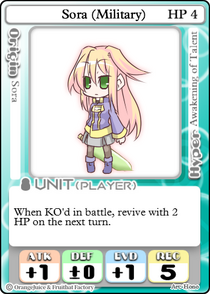 Sora (Military) (ソラ (軍服) Sora (Gunpuku)) is one of the bonus characters in 100% Orange Juice!, that is unlocked by owning the game, Sora, in which she is the title character.

Having yet to desert the army, and head out on her own, Sora (Military) is an early war version of Sora with slight modifications. Sora (Military) is a powerful yet relatively balanced character featuring a below-average health stat of 4, a slightly boosted attack and evasion stat, and a neutral defense and recovery stat. This provides her with both a decent amount of attack power and a fair amount of survivability from lower value roles. Consequently, if the player has pleasant luck, Sora (Military) should generally not have much difficulty dealing with

Encounter panels as her attacks are either strong enough to KO the opponent or her evasion will protect her from the returning attack. This is advantageous over time as the player can often transition easily between wins or star norma based on their luck during the game. Her hyper also provides her with a method to collect more stars or wins if timed correctly, which can be critical in the late game. The key feature that sets Sora (Military) apart from Sora, however, is her unique passive, which generally makes her more combat-focused then her counterpart. Whenever Sora (Military) is KO'd in combat, she will immediately recover with half of her health but will be unable to move until the following turn. Under the proper conditions, this passive can be extremely beneficial. Being able to get up immediately has the advantage of providing zero "downtime" for the player. As a result, the player can get back to the game quicker, which enables them to recollect lost stars or continue pursuing the opponent that KO'd them, especially if the opponent that KO'd Sora (Military) is low on HP. The only way for the player to enter recovery is to be KO'd by noncombat based damage such as a Field Event or card that deal damage such as

Long-Distance Shot for example. If the situation presents itself, the player might be able to use any of the aforementioned methods to enter recovery on purpose if need be.

Despite her strengths, Sora (Military) is not without her flaws. Given Sora's below-average health stat and neutral defense stat, her ability to survive is lessened over continued combat, if the opponents consistently roll well. Likewise, she is heavily disadvantaged against strong rolls and, as a result, the player should try to keep their distance from

Boss panels. Ironically, Sora (Military)'s main disadvantage is also her greatest strength. Given that the worst opponent Sora (Military) can generally face is a "bigger bully" such as Tomomo or Star Breaker, her unique passive ability can be a double-edged sword. Since Sora (Military) revives with only 2 health points, she can be quickly KO'd again by an aggressive opponent after automatically reviving. If the player is particularly unlucky, this vicious cycle can continue throughout the entirety of the game if they are either unable to escape the opponent or consistently roll low.

Like most characters in the cast, Sora (Military) should generally aim for star norma, but she can play either wins or stars dependent on how well the player rolls and what they draw. If the player is having a good run, +1 attack can go a long way, and Sora (Military) may eat up a lot of opponents and

Encounter panels. However, the player may want to play passively unless the opportunity to strike presents itself. The player should generally hold onto their hyper and combo it with either an event or battle card for a power play later in the game. The player should mainly aim for

Encounter panels but should take care to make sure they have cards in their hand for later, especially their hyper and a combo card.

Cons
-Below average HP stat
-Passive ability can backfire, under the right circumstances
-Cheaper but slightly less powerful Hyper than Sora
-Hyper can be situational or underwhelming