Sora (ソラ) is a single-player shoot-em-up video game developed by Orange_Juice and published by Fruitbat Factory, and it is the sequel game to Suguri.

Sora was released in Japan on August 15th 2010 during the third day of Comiket 78 and was the eighth game developed by Orange_Juice.[1] A demo was released at about the same time, featuring the game's first two levels. Furthermore, after Sora's release, a patch, 1.1, was released that fixed a number of bugs, as well as adding an extra stage to the game in which features two new boss fights against Suguri and Hime.

Over 10,000 years before the events of Suguri, there is a never-ending battle between two unnamed armies that no longer remember their purpose for fighting one another. During the war, Sora is born with an innate ability to fight. Though she does not enjoy her abilities and desires the war to end, she is immediately entered into the forces of one of the armies. While there, Sora is trained the basics by Sham who requests that she return alive from her first mission.

Soon after, Sora goes on her first mission, onto a battlefield against the enemy forces, and encounters Alte. Sora pleads with Alte and everyone else not to fight, but Alte refuses to relent, believing that whichever side of the war loses stands to lose everything. In her desire to protect her husband, she decides to face Sora regardless of the risks. In the ensuing battle, Alte is defeated by Sora, and in a desperate attempt to defeat Sora, Alte holds onto her, enabling a big machine to collide into both of them. Alte is killed in the explosion; Sora, however, is only knocked out and is rescued and nursed back to health by Yukito, a deserter from the opposing army.

While in his care, Yukito explains his vision for a world with no war and blue skies, and Sora decides to join his cause, deserting her army. In response to Yukito's desertion, the opposing army releases Tsih to track him and his crew down and destroy them. However, she encounters Sora in her attempt to kill Yukito, and is herself killed. In retaliation for Tsih's death and to complete her failed mission, the army releases Mira (a warrior referred to in plural as they are composed of two people fused into one: one person's mind and another person's body) to dispose of Sora. Sora defeated "them" as well, however, presumably killing both of Mira.

Sometime later, Sham finds Sora and urges her to return to her army, but Sora refuses, wanting to end the war once and for all. Unable to sway Sora's decision, Sham tries to force her to return with her, but fails. Defeated but still alive, Sham decides to allow Sora to try to end the war. Although she will be furious if Sora dies trying, she will be happy if Sora succeeds.

Sora returns to the HQ of her former employers to try and stop the war once and for all. But with Sora gone, the army has created a new ultimate weapon, Nath, to serve as her replacement. Sora fails to persuade Nath to surrender, with the latter claiming that she no longer has the free will to do so, and the two fight, resulting in Nath's defeat. Nath finally surrenders and congratulates Sora for effectively ending the war, but the event is cut short by a massive laser launched by Star Breaker. In a final attempt to avoid defeat, the army opposing Sora has sent Star Breaker, an insane warrior who desires to destroy everything, to attack the city Sora and Nath were fighting in, destroying the city and killing Nath in the process. After a battle, Star Breaker attaches herself to a satellite on a crash-course set for Earth, intending to obliterate all life found on it. Sora is able to stop Star Breaker with her shield, preventing the planet's destruction, but Sora is knocked unconscious afterwards, disheartened to see that even in the end of the war, the sky is still gloomy.

Ten thousand years after her victory over Star Breaker, and shortly after the events of Suguri and Acceleration of Suguri, Sora re-awakens to see that the sky is still grey and appears to be sprinkling ash on her, causing her to believe the war is still ongoing. Spotting Suguri and Hime nearby, she fights them both of them in rage; while able to defeat Hime, her battle with Suguri ends in a stalemate, resulting in Suguri pulling her above the clouds, showing her the blue skies that Sora had previously fought to restore.

The beautiful blue sky is getting painted darker with each passing moment.
War.
People killing each other.
No one knows who started it anymore.
No one even knows how long they have been fighting, forgetting what they are fighting for.
During this war, a girl was born.
Her name was Sora.
She was born with a power for fighting.
She was not happy about it, but the people around her were.
They sent her to the battlefield with no regard for her feelings at all.
The last war on the worn-out planet.
Whether it is won or lost, there will be nothing left.
Sora does not know the meaning of her fight. 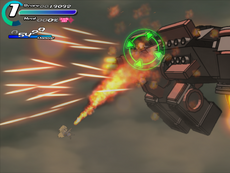 The grim, war-ridden world of Sora

While little is truly known, Sora takes place on a war-torn world where the sky is always grey and gloomy, much to Sora's disappointment. While Sora herself remembers a time when the sky was blue, the sky remains darkened throughout most of the game, likely a result of the constant fumes and explosions from the constant war. The setting is almost entirely airborne and the only ground ever seen during the course of the game is the visible HQ when Sora battles against Nath. During her time in the war, Sora fights in a training program and on a endless battlefield. The sky later becomes red, when Star Breaker arrives and begins to torch the world.

Before Sora's release on Steam in 2016, it was announced on December 11th, 2015 that anyone who purchased Sora would receive a special bonus character, Sora (Military), as a character for use in 100% Orange Juice![2] This version of Sora is based on the version of Sora during the war, before her current appearance in 100% Orange Juice. Driven to fight in an endless war without a break, this character features a different playstyle, a new passive effect, and a new Hyper card,

Awakening of Talent, for the player to experience. Since Sora's original release date, the offer has remained, and the bonus character can still be unlocked if the player purchases Sora on Steam.

Prior to Fruitbat Factory's localisation of Sora in 2016, the game was originally localised and released on 1 June 2012 by ΩTH (Omega Translation House) on GamersGate; it is not known how ΩTH attained the rights for the game's release after Rockin' Android's releases of Suguri, Acceleration of Suguri, and Flying Red Barrel. ΩTH's release of Sora received negative feedback from players due to its dubious quality, especially compared to the original Japanese release. ΩTH's Sora features a number of game-breaking bugs, SecuROM DRM that was improperly implemented, and a new script that featured numerous errors and is generally unfaithful to the original script; the characters Tsih, Sham, and Nath, for instance, were all renamed Telos, Siri, and Nadius, respectively, while Tsih is also referred to as being male instead of female.[3][4] The script also features a number of inappropriate pop culture references, such as referring to the characters as "reploids" instead of "altered humans", as well as one instance of Sora quoting the Borg from Star Trek: The Next Generation in the game's first level.[5]

It was later revealed that ΩTH was not a real publisher, and was instead a front by an internet troll by the name of FalcomGameFan, who was posing as an official publisher on GamersGate.[6][7] Owing to this, ΩTH also posted on the now-defunct Steam Greenlight, and a Youtube channel was created using the developer's name, "OrangeJuiceGames2012", for the official trailer.[8] ΩTH also attempted to cover evidence by sending copyright claims to videos and blogs of Sora, causing at least one playthrough of Sora to be removed from YouTube.[9] ΩTH also attempted to defend its work by creating sockpuppet accounts on the official trailer page to defend its work before eventually disabling comments and later deleting the channel altogether.

ΩTH's Sora was later pulled from GamersGate at some point in 2015[10], though its official site still exists on Orange_Juice's servers; another complete playthrough of ΩTH's Sora was also uploaded in 2016 to 2017, as to demonstrate the game's glitches and script. ΩTH is not known to have published any games since its release of Sora in 2012.

2 add-ons have been released for Sora, all of which are music from the game.