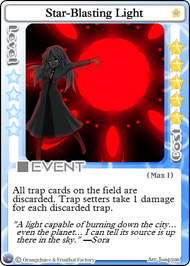 All trap cards on the field are discarded. Trap setters take 1 damage for each discarded trap.
Level
4 ☆
Cost
50 ★
Limit
1 per Deck
Deck Points

2
Symbol
30px
Illustrator
Junpyon
Rare Card
Acceleration Pack
"A light capable of burning down the city... even the planet... I can tell its source is up there in the sky." —Sora

Star-Blasting Light is a 4-star level event card with a hefty price and potentially brutal effect. When activated, all trap cards will be removed from the board, including those spawned by the MinelayerMinelayer
Every 3 Chapters, a Trap Card will be set on a randomly determined panel. These Trap Cards are not affiliated with the Center Deck, and will therefore not return to the Center Deck afterwards. The cards include:

Mimyuu's Hammer field event, and players will take 1 damage for each trap currently on the board that they placed. (The card will show a "Miss" if no traps are destroyed.)

Star-Blasting Light is an extremely powerful, but little used, event card that wipes all trap cards from the board. As one might expect, this can be particularly useful on boards where the amount of traps has become so saturated that it’s almost impossible to navigate without triggering one. At its extremely high star price for usage, the card has limited practical application, however, its price can be eased with

President's Privilege or commonly triggered with

Play of the Gods. Star-Blasting Light's main use is as perhaps the strongest counter card against Krilalaris, Star Breaker, Tequila, Yuki (Dangerous), and even Arthur, as the card acts as a direct counter to their hyper cards. With these characters spawning numerous traps with one card and likely using more than one over the course of the game, the card is almost always lethal and removes the opponent's main source of strength, their traps, from the board. The card does have more general purposes, however, as the player can also use the card to either damage multiple characters at once if many players are using traps or the card can be used to remove a certain trap off the board, such as a trap on the players

Big Bang Bell. As a result of both these uses, Star-Blasting Light is a decent option for tank characters like Kyoko and Fernet who need ways to defend their health supply against any type of damage.

The main problem surrounding Star-Blasting Light is the fact that the card is relatively niche. Besides taking out a few specific characters that are trap heavy, the card is rarely needed. Further, as aforementioned, the card is difficult to play, given its massive star price and level requirement greatly limiting its use, similar to

Sealed Guardian. The last issue the player needs to be aware of is that Star-Blasting Light is an event, and like most event cards, affects all players including the player who activated the card. This means that although characters like Star Breaker can bring the card, it would be tactical suicide to do so, as another player can use it against her and it will destroy her own traps if she uses it.