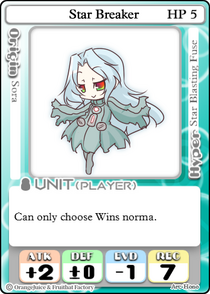 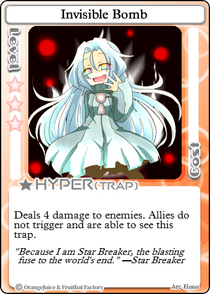 Deals 4 damage to enemies. Allies do not trigger and are able to see this trap.
Hyper Info
Effect Type
Trap
Level
3
Cost
0 ★
Symbol
[[File:|30px|link=]]
Illustrator
Hono
"Because I am Star Breaker, the blasting fuse to the world's end." ―Star Breaker

In Co-op mode, Star Breaker's REC stat is increased from 5 to 7, due to her base ATK of +2. Star Breaker's passive does not change, but interacts uniquely with the changes to Norma progression in Co-op:

Star Breaker's secondary Hyper, Invisible Bomb, has a different effect in Co-op. This trap is visible to allies and can only be triggered by enemies. When this card is triggered, it will deal 4 damage to the affected unit as well as all non-KO'd units on the same panel. (In all other aspects, this Hyper functions similarly to its Normal mode counterpart.)

Star Breaker's base stats give her 24 starting stars and a markup of +40% at shops.