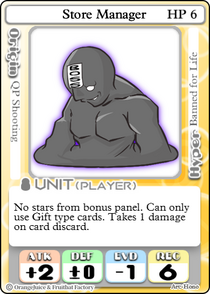 Store Manager (店長 Tenchō) is one of the playable characters in 100% Orange Juice!.

Store Manager features a very strong attack stat while having an above average health pool, which allows him to be very effective in battles. This proves useful, since he cannot gain stars from

Bonus panels, and cannot use any cards except Gift cards, which means he will have to rely on his base stats to defeat enemies. To add onto this, any cards that are discarded (this includes using Gift Cards like

Windy Enchantment) will damage him by 1 Health point, thus he will need to avoid landing on

Draw panels or find a way to drop his cards.

Pros
+One of the best ATK stats in game
+Discard passive allows Store Manager to reset rather than allow another player to KO him.
+Hyper is very disruptive when used on other players.
Cons
-Can't use cards except Gift cards, relies on allies playing cards that benefit him.
-Can be severely affected by card-giving effects.
-Due to his anti-card nature and need to engage in combat to progress, he ends up being map dependent.