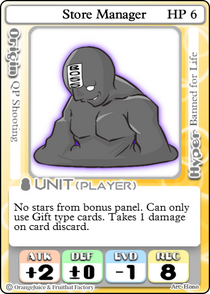 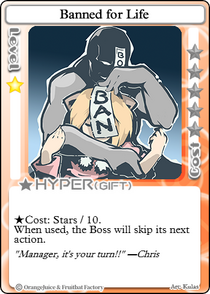 Store Manager's Hyper, Banned for Life, has a different effect in Co-op. Unlike its Normal mode counterpart, this Gift card has no effect when held and is discarded on use instead of being sent to another random player. When used, the boss will gain one stack of the Banned for Life stock effect (not to be confused with the Gift card's passive effect). The affected unit will skip its next pending action, meaning that the next boss card to be played will not be activated. Only one boss action per Chapter can be skipped this way.

Store Manager's base stats give him 24 starting stars and a markup of +40% at shops.