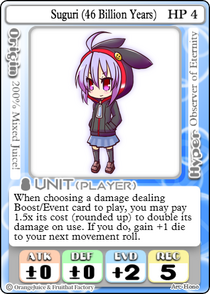 Base Stats
HP
4
ATK
±0
DEF
±0
EVD
+2
REC
5
Passive
When choosing a damage dealing Boost/Event card to play, you may pay 1.5x its cost (rounded up) to double its damage on use. If you do, gain +1 die to your next movement roll.
Basic Info
Origin
200% Mixed Juice! 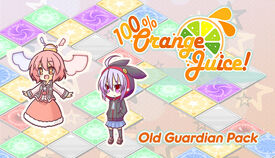 Theme
▶️
For the alternate versions of this character, see: Suguri, Suguri (Ver.2)

Suguri (46 Billion Years) is a character with a relatively balanced statline that is built around her passive of being able to boost damage dealing cards and gaining double dice for movement. With her statline of having 4 HP, 0 DEF, and 2 EVD, she can be hard to kill for neutral or lower ATK characters. Her passive also allows her to be a much bigger offensive threat than her 0 ATK suggests. She is the best character at getting characters low then fighting them for an easy kill. Tanks especially fear her as they can’t do much about her getting them to low HP, and they can’t fight back since her 2 EVD means that she evades most of their rolls. She doesn’t have to fear

Encounter panels, but she shouldn’t expect to kill them frequently. However,

Boss panels are something she is deathly afraid of, and she should avoid them at all costs if she has a significant amount of stars, even if it means boosting her out of combat damage-dealing cards.

Her main disadvantage is that she is reliant on getting her cards. She will generally fall flat if she can’t get them since she isn’t a big threat outside of them. And even if she gets the cards she wants, her opponents might not be at the right HP in order to use them to their max effect, so she has to look for other solutions like having to attack someone else with a boost card just to use Rejuvenation to reach a target. Another problem is that her 0 ATK does pose a problem for her as high EVD characters will still be hard for her to kill. For example, if she fights Aru at 1 HP, she will only have a 27.78% chance of KOing her without cards to boost her ATK. She also has a lower pool of cards that she can safely boost as

Air Strike are generally too expensive for her to boost, and

Big Rocket Cannon will do too much damage unless she is against Arthur, Marie Poppo, Marie Poppo (Mixed), Kiriko, or NoName if he is in body form.