Suguri (スグリ) is a single player video game developed by Orange_Juice and published by Rockin' Android, and it is the predecessor to Sora.

Suguri was released in Japan on December 30th, 2005 during Comiket 69 and was the second game developed by Orange_Juice.[1] This game is also the first game to be released from the Suguri series. Suguri saw a western release with Rockin' Android on June 30th, 2009[2] and was later released on Steam on June 1st, 2014.[3]

After the events of Sora, the war between the two armies ended leaving the planet in ruin. Even with the wars end, many people gave up up hope that the planet would ever be restored to normal. Subsequently they constructed a large spaceship and left the planet. The remaining inhabitants of the planet tried their best to restore the planet but human hands were not enough. As a result, Project One was created to enhance a human's ability to revive the desolated planet. One of the members of the project, Yukito, enhanced his daughter, Suguri, to be the planet's caretaker.

Nearly 10,000 years later, the global environment has relatively stabilized- forests and flowers have grown, animals have increased in number, yet Suguri still looks like an ordinary girl. However, one day unknown objects fell from the sky like rain, causing trouble for the inhabitants of the planet. In light of the event, Suguri went to investigate their origin.

Suguri eventually finds Saki, who was scouting to determine if the planet is inhabitable or not. Saki did not expect to find other humans on the planet and was ordered to eliminate any natives if she found any. Saki feels ashamed that she will have to destroy Suguri despite both being able to communicate with each other. Suguri beats Saki in their battle, but Saki survives the confrontation.

Some time later, Suguri encounters Iru. Iru has heard about Suguri's strength from Saki and reveals that her group has deemed the planet inhabitable, and that they want to colonize it. Much to Suguri's dismay, Iru also declares that the natives need to be eliminated. Suguri asks each why elimination was even necessary and Iru tells her that she had no clue why, she was just ordered to do so. After a short battle, Suguri beats Iru.

Suguri then finds Nanako who has been searching for Suguri. Nanako states that, like the previous girls, she was ordered to eliminate the natives of the planet. Suguri suggests negotiating the situation instead, but Nanako refuses stating that she was not ordered to negotiate. Nanako reveals that these orders cannot be disobeyed, she and the others were programmed to physically be unable to disobey the orders. Suguri pities Nanako, but Nanako has no interest in Suguri's pity. Nanako then battles Suguri declaring that she needs to destroy her quick or she will get into trouble. Like her former opponents, Suguri beats Nanako in their battle.

Suguri wonders if these invaders she has been encountering have all been treated like the previous girls she has met. She then bumps into Kae, who has also been searching for Suguri. Kae calls Suguri "Silverhead" which Suguri didn't like. Kae reveals that no one has reported Suguri's name, so her group has just been calling her Silverhead. So in response, Suguri gives Kae her name to report. Kae states that she has the same orders as the others, and asks Suguri for a seriously fun fight. Suguri says that she would rather make peace but she will fight to protect the planet. Kae does not understand Suguri since she is having so much fun at the moment. Kae gets pumped and overly excited and then fights Suguri, ending in the former's defeat.

After breaching the defenses of the interior of the spaceship, Suguri meets Shifu, who is piloting the Shifu Robot. Shifu reveals that he was the one giving the orders to eliminate the natives of the planet and the one who programmed them to be unable to disobey him. Shifu wanted subordinates that will do whatever he tells them, which is why he programmed them that way. Shifu explains that the spaceship has been traveling for thousands of years, looking for a habitable planet. He eventually found Suguri's planet, but Shifu hates that there are already people inhabiting it. Not desiring to share the planet with the natives, Shifu has ordered there elimination. Suguri argues that there are still plenty of places to live on the planet and no one would mind the spaceship's inhabitants settling on the planet. Shifu refuses Suguri's offer, however, opting to take the planet for himself. Unable to forgive Shifu for his actions, Suguri battles and destroys the robot, but Shifu manages to escape.

Heading deeper into the ship, Suguri tells Shifu to give up, but Shifu refuses and releases Hime, the ship's guardian. Shifu orders Hime to kill Suguri but Hime questions why. Hime states that Shifu is too selfish for wanting to take the whole planet for himself. Shifu, again, orders Hime to do what he says but Hime refuses once more. Enraged, Shifu threatens to detonate the section of the ship containing the inhabitants, if Hime refuses to follow his orders. Aware that Shifu is not bluffing, Hime requests to fight elsewhere and asks Suguri to follow her to the outside of the ship. After reaching the outside, Hime is amazed by the sky, longing to enjoy the sight, but is resolved to fight Suguri to protect everyone in the ship, and Suguri agrees to fight in order to protect everyone on the planet.

Hime and Suguri enjoyed their fight, but they both cease combat once they are far enough from the ship. Hime asks Suguri to quickly help her detach the civilian block of the spaceship so that Shifu cannot detonate the inhabitants. Hime reveals that the inhabitants of the ship are nice and it is just Shifu that is insane. Suguri is relieved that the inhabitants are not like Shifu and states again that the natives of the planet would have no problem living with the inhabitants of the ship. Hime thanks Suguri for her assurance. With one shot, the duo detached the civilian part of the spaceship to Shifu astonishment. Incensed by Hime's betrayal and the escape of hostages, Shifu decides that if he cannot have the planet then no one will. Shifu sends the massive ship plummeting toward the planet to destroy it. Refusing to lose all that she holds dear and her father's dream, Suguri uses all of her strength to generate a single beam, which destroys the descending ship along with Shifu, ending the confrontation once and for all.

In the end, Suguri welcomes the former inhabitants of the ship to the Earth. 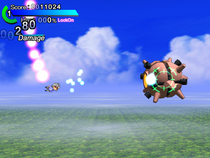 The bright, restored world of Suguri

Suguri takes place on a previously war torn world that is currently undergoing recovery thanks to the inhabitant's and Suguri's efforts. For most of the early game the sky is clear from gloom with the sky gradually getting more darker and cloudy as Suguri approaches the spaceship. The overall interior of the ship if very spacious, which allows Suguri movement to be uninhibited with the exception of a few corridors. When Hime and Suguri exits the ship, the ship has already risen to the upper Troposphere of the planet, so the duo exits to find a clear and fascinating moon lit sky above the clouds, which fascinates Hime.

1 add-on has been released for Suguri, which is music and unused music from the game.[4]