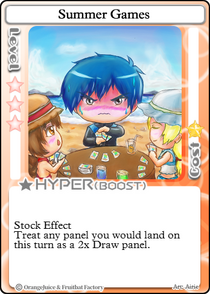 Summer Games is a Hyper unique to the Dealer role in Co-op Mode. The player can substitute it for their character's Hyper card after reaching level 10 with the Dealer role. It is a Norma 3 boost card that treats the next space the user lands on as a

Draw (x2) panel, like an upgraded version of Demand.

This card is best used by characters who have good stats for the dealer role, but have a hyper card that does not aid their allies enough or is too restrictive to use. This can prove a bit paradoxical due to dealer role's high synergy with strong hyper cards, but a possible example could be Nath. Although Another Ultimate Weapon is powerful, it is also extremely expensive. Opting for Summer Games allows Nath to stay out of trouble later in the game and help her find more battle cards to stack Active Extension.

Boss panels in a pinch, in the same way that Demand can.

The downside to using this hyper card is the fact that most characters would just prefer to have their own hyper card in order to send them to teammates. Using Summer Games defeats this purpose and forces them to use a card that replaces their existing Hyper. Many characters that do well in the dealer role already have strong hyper cards that they may prefer over this one and would rather give their teammates access to, such as Yuuki's