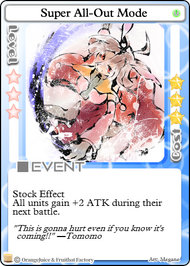 5
Symbol
30px
Illustrator
Megane
Uncommon Card
Expansion Pack
"This is gonna hurt even if you know it's coming!!" —Tomomo

Super All-Out Mode is a 3-star event card that gives all units a +2 ATK boost during their next battle. Units that are KO'd will still receive the stock effect.

Super All-Out Mode is one of the few ways to increase a unit's ATK outside of battle cards and character-specific abilities, like Kae's passive. Since it can be comboed with battle cards, it is a very strong tool for offensive characters to get KOs. Even more neutral characters can use Super All-Out Mode as a means to finish off an opponent. While it's high cost can be a deterrent for some, players looking to gain victory though win normas are less affected by the cost. It can even help them by keeping their star count low enough to prevent handing another player a massive number of stars in the event of a KO.

Super All-Out Mode can be a risky card if it is used at the wrong time. If the player cannot finish off their opponent, they risk taking a massive counterattack due to the stock effect being applied to all units. Characters with negative ATK modifiers like Aru or Marie Poppo in particular risk having this happen to them. Because of this, many characters cannot justify the high star cost that comes with the activation of this card unless a KO is more or less guaranteed. Characters that are forced to always act second in combat are almost always put at a disadvantage by Super All-Out Mode due to the opponent getting to deal damage or even potentially KO the player. Sherry can run into trouble unless her opponent has already used the buff, but Iru suffers the most when Super All-Out Mode is played by far. Sherry at least has her excellent bulk to help keep her alive, but Iru is very frail and risks being KO'd even while at full HP.