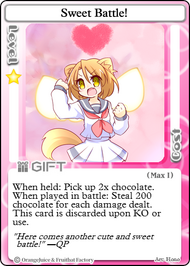 When held: Pick up 2x chocolate.
When played in battle: Steal 200 chocolate for each damage dealt.
This card is discarded upon KO or use.
Level
1 ☆
Cost
0 ★
Limit
1 per Deck
Deck Points 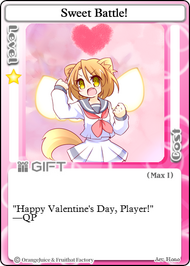 Sweet Battle! is a seasonal event Gift card that is automatically placed in the center deck during specific events. It was first introduced during the Chocolate for the Sweet Gods event, and was also featured during the reruns of this event in 2019 and 2021.

For the duration of the event, a total of 6 copies of this card are added to the deck at the start of the game, giving the deck a total of 54 cards instead of the usual 48.[1]

The card can be used as either a Gift card or a Battle card.

When this Gift card is held, a x2 multiplier is applied to all chocolate picked up by the player. If multiple copies of Sweet Battle! are held, the effect will not stack.

When used in a battle, the player will steal chocolate from the opponent upon dealing damage, equal to 200x the amount of damage dealt.

The card itself is only present during the event as its sole purpose is for collecting chocolate. As a Gift card, it is greatly advantageous as it can easily help a player achieve around 5,000 chocolate per game when held, especially on larger boards. The card is also very effective as a Battle card. Due to its high multiplier of 200, the player can receive a lot of chocolate even if they only deal a small amount of damage. If the player is going to be KO'd, they might as well use the card in battle if they have no other, as they will lose it if they are KO'd anyway.

As a card, Sweet Battle! is not disadvantageous to any character, as its only effects are related to collecting chocolate. Since it doesn't affect stats when used in battle, the player will have to use a Boost or Event card in combination with Sweet Battle! if they want to steal a large amount of chocolate. However, given that chocolate does not affect gameplay, it may be best to simply hold the card rather than use it in combat.

However, the card does still have some impact on gameplay, despite its frivolous effect. Since it adds extra copies of cards to the deck, this can make it more difficult for card-dependent characters to draw the cards they need. In addition, some characters receive a notable edge from the card due to how it can synergize with certain character passives. Its nature as a Level 1 0-cost card makes it a boon for Nath, who benefits from cards being played in battle, and Mei, who benefits from having an empty hand. In addition, Tsih and Nico both benefit from having extra Gift cards in the deck. Finally, although it doesn't provide any specific advantage, Store Manager notably does not take damage when playing the card to discard it, and is also able to play the card in battle.