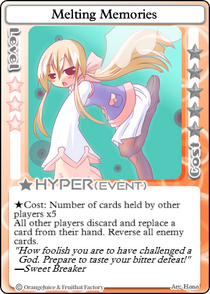 All other players discard and replace a card from their hand. Reverse all enemy cards.
Hyper Info
Effect Type
Event
Level
3
Cost
Number of cards held by other players x5 ★
Symbol
[[File:|30px|link=]]
Illustrator
Hono
"How foolish you are to have challenged a God. Prepare to taste your bitter defeat!" - Sweet Breaker

Sweet Breaker's Hyper is Melting Memories. When used, all units except the player will have all the cards in their hand shuffled and reversed. In addition, each of these units will discard a random card in their hand and replace it with a new card drawn from the center deck.

The Hyper's effects apply to the cards themselves and not the player, meaning that the cards will be permanently reversed until used or discarded.

Melting Memories is one of the most unique Hyper cards in the game. When activated, the effect works in tandem with Sweet Breaker's passive ability to boosts all of her stats. This enables her to have very high base stats if the opponent has 3 cards in their hand. This easily makes a Sweet Breaker a risk to fight against in any scenario, as she can play the role of both an offensive and defensive character at the same time, when boosted by her Hyper. Advantageously, the Hyper is also relatively useless to other characters, as it will only serve to boost Sweet Breaker's stats.

While designed as a mostly offensive-based card, the Hyper also acts as very powerful disruption to opposing players. The effect enables Sweet Breaker to see all of her opponent's cards permanently until they are either used or discarded, which enables the player to counter enemy strategies before they occur. More importantly, this often leads other players to act in a frenzy, often using cards without purpose to emptying their hand.

While overall a strong Hyper, the main drawback of Melting Memories is that it can be expensive depending on the amount of cards held by the opponent, although its price can be bypassed with

President's Privilege. It also can be very easily countered simply by the opponent "wasting" their cards to empty their hand, or by cards that empty the hand such as