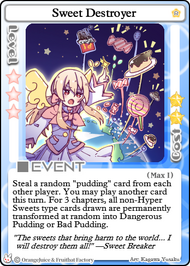 Steal a random "pudding" card from each other player. You can play another card this turn. At the end of your turn, discard as many cards as you gained.
Level
3 ☆
Cost
20 ★
Limit
1 per Deck
Deck Points

2
Symbol
30px
Illustrator
Yusaku Kagawa
Rare Card
Pudding Pack
"The sweets that bring harm to the world... I will destroy them all!" ―Sweet Breaker

Sweet Destroyer is a collectible Boost card that can be acquired from the Pudding Pack.

When used, one pudding card from each opponent's hand will be taken, then added to the player's hand. The player can then play another card that turn. At the end of the player's turn, they will discard all cards gained through Sweet Destroyer.

While its uses are limited, Sweet Destroyer is an important tool for characters with pudding-based synergies. Tank characters like Fernet and Kyoko can play this card alongside

Pudding in order to swipe a late-game heal. While QP (Dangerous) risks having her precious cards stolen, it also lets her take pudding cards from other players' hands, potentially giving her a massive boost before initiating combat on a player. Yuki (Dangerous) is perhaps the best user of Sweet Destroyer, as she converts any pudding cards she steals into

Tragedy in the Dead of Night, which she can play immediately. Alternatively, the player can run Sweet Destroyer with no pudding cards as a junk card for characters like Aru (Scramble) or Arthur who want to give their opponents useless cards.

The main downside of Sweet Destroyer is that it requires pudding cards to not only be in the deck, but in opponents' hands to be effective. Due to being low-level trap cards,

Dangerous Pudding will often be played immediately after being drawn, leaving only

Portable Pudding to be stolen.

Portable Pudding is expensive and