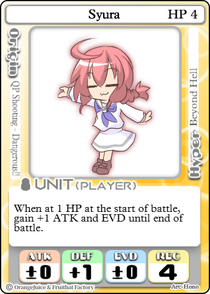 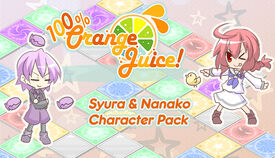 Syura (しゅら shu ra) is one of the playable characters in 100% Orange Juice!. She was added to the game in DLC 1

Syura is built on a slightly tanky statspread, with a passive that gives her a bonus to attack and evade. With this more tanky statspread, Syura is able to be hit a couple of times without risk of KO. This allows her to take

Drop much more often, keeping more of the stars you have gathered. On top of this, Syura is able to gain an offensive presence through the use of her passive and

However, Syura's downsides include the fact that she herself cannot obtain much of an offensive presence without the use of cards like her hyper and without being at certain HP thresholds. coupled with the fact that she does not tank as well characters such as Fernet or Kyousuke she can be relatively easy to deal with, forcing her to constantly manage her health and cards in order to be most effective.

Due to the nature of Syura's stats, she should almost always be going for star normas. Syura should play more conservatively unless she desperately needs stars and is way behind. As well as looking to keep cards in her hand to always have the option to make a play if she needs to.

Pros
+Extremely powerful free hyper that gets stronger as her HP depletes
+Above average DEF stat.
+Low REC
+Gains a bonus in ATK and EVD at 1 HP
Cons
-Below average HP stat
-Hyper can be countered by