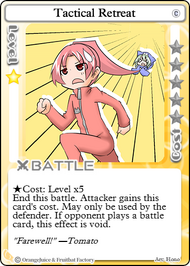 End this battle. Attacker gains this card's cost. May only be used by the defender. If opponent plays a battle card, this effect is void.
Level
1 ☆
Cost
Lvl x5 ★
Limit
3 per Deck
Deck Points

Tactical Retreat is a 1-star battle card that allows the user to flee the battle in exchange for giving their opponent some of their stars. It can only be played in battles where the player acts second. This card fails if the opponent uses a battle card, in which case the player still loses stars but does not give them to the opponent.

Tactical Retreat allows the user to prevent battles from taking place for a modest star cost. It is best used in order to avoid the effects of temporary combat modifiers, such as boost or event cards or Field Events such as AmplifyAmplify
Every 6 Chapters, all players will randomly receive a +1 bonus to their attack, defense, or dodge stat (marked by a symbol). This effect lasts for 2 Chapters.

Evasion stat +1. As such, is is a great counter to one-time buff cards like

Super All-Out Mode or debuffs such as

Poppoformation, provided the opponent does not follow up with a battle card of their own. Frail characters such as Aru or Marie Poppo can use this card as a defensive option, as it will rarely benefit the characters that would try to take advantage of them. Sherry can play it in any battle thanks to her passive, which also prevents opponents from ever using it against her. Nath is another surprisingly good user of Tactical Retreat. Early game, it keeps her safe while helping her gain active extension stacks. If it is used against her later in the game once she has obtained some stacks, she can cancel it out with battle cards. Worst case scenario, she gets some stars and a stack for her trouble.

Boss panels (unless the player is Sherry). It is also easily countered by almost any other battle card, which can have a huge impact on the player's card selection for building decks. Playing Tactical Retreat alongside other battle cards is asking for it to get countered. Even if the player escapes an attacker successfully, they can always be attacked again if they roll poorly for movement, making it less helpful against naturally strong characters like Store Manager. The player needs to be able to escape with cards like

Here and There or heal via a

Home panel, or else they risk getting KO'd the following chapter. In some situations, it might even be better to take the KO, especially in the very early game where the activation cost is up to half the stars required to norma.