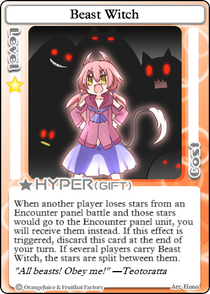 When another player loses stars from an Encounter panel battle and those stars would go to the Encounter panel unit, you will receive them instead. If this effect is triggered, discard this card at the end of your turn. If several players carry Beast Witch, the stars are split between them.
Hyper Info
Effect Type
Gift
Level
1
Cost
0 ★
Symbol

Teotoratta's Hyper is Beast Witch. When this Gift card is held, and when any unit other than the player is KO'd in an

Encounter panel battle, the stars lost by the KO'd unit will go to the player instead of the Encounter panel enemy. When this effect triggers, the player will instantly gain 1 stack of Beastly Tribute. This will cause all Beast Witch cards in the player's hand to be automatically discarded at the end of their next turn. Upon use, this card will be discarded.

Beast Witch allows Teotoratta to "steal" stars from whomever gets KO'd by any wild enemies (except bosses and the Pirate Crew Member summoned by Tequila) when holding this card. Because Teotoratta does not trigger Encounter panels,

Pet Snacks can be very beneficial for her as it will make wild units much more dangerous for other players to deal with.

Piyopiyo Procession can also be helpful since victims have to battle against wild units when stepping on them, but they can also potentially cause backfire as characters that usually go for wins norma will more or less benefit from such cards' presence, and Teotoratta cannot prevent battles caused by these effects.

Due to the nature of Beast Witch relying heavily on wild units to make a difference, if there is no Battlefield event, a boss is present, or the board simply doesn't contain a good amount of Encounter panels, it's practical usefulness is heavily restricted. On the other hand, because of the very limited usage, Beast Witch itself doesn't quite worth mimicking when compared to many other Hyper cards from other characters, so packing

Mimic in the deck for some better Hyper cards is also viable if Beast Witch can't be of much help.