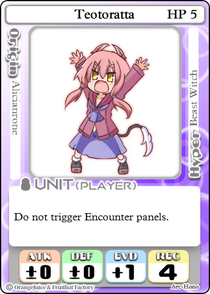 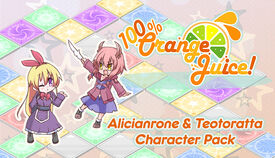 Teotoratta (テオトラッタ Teotoratta), also known as Teo, is one of the playable characters in 100% Orange Juice!. She was added to the game in DLC 27

Teotoratta possesses somewhat decent stats across the board; With the average stats of 5 HP and neutral ATK, DEF, but with +1 EVD and REC of 4. As a consequence, she cannot trigger an Encounter panels and she possesses the hyper that relies heavily on them, but very underwhelming when compared to other characters' hypers.

This means that if a player uses Oh My Friend or Overseer, her hyper becomes practically useless until a boss is gone. However, if you know beforehand that the field will include Battlefield, then Teotoratta will be a viable choice as she will never initiate a battle with minions from encounter panels thus carry no risk of losing HP & stars from them, and you can expect more chance that the player would get KO'ed from them.

Teotoratta is an opportunist and passive character: she benefit herself from her ability and her hyper. Because she can only get wins from KOing enemy not from encounter panels, she will require to aim for Star Norma rather than Win Norma (Only pick Win Norma if you already satisfy the condition beforehand). Since her stats are basically neutral and her hyper doesn't boost her stats, she is neither offensive nor defensive. However, with a card that boosts her stats, she can strike players with low HP and defend/evade well.

Encounter panels, meaning you're safe from most battles with regular enemies
+Level 1 and free to use Hyper

Cons
-Hyper relies on other players messing up
-Hyper is almost useless if a boss is on the field; also meaning it is heavily countered by Overseer and Oh My Friend
-Hyper can be seen by everyone
-Cannot benefit from