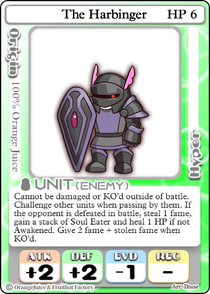 Base Stats
HP
6
ATK
+2
DEF
+2
EVD
-1
REC
-
Passive
Cannot be damaged or KO'd outside of battle. Challenge other units when passing by them. If the opponent is defeated in battle, steal 1 fame, gain a stack of Soul Eater and heal 1 HP if not Awakened. Give 2 fame + stolen fame when KO'd.
Basic Info
Origin
100% Orange Juice!

The Harbinger (先駆者 Senku-sha) is a special enemy unit featured in Bounty Hunt Mode. It was added to the game during the Bounty Hungers event, which also introduced the mode as a permanent game mode.

The Harbinger is a special unit that only appears in Bounty Hunt Mode. After Chapter 15, there is a chance at the start of each chapter for The Harbinger to spawn on a random panel. It will be an extra unit that will walk around on the board, taking its turn after Player 4. The Harbinger will only trigger movement-type panels, and will attempt to fight other units on the board. It will remain on the board until it is KO'd, and gives 2 Wins upon defeat. Only one will spawn per game.

The Harbinger will have a HUD located at the top of the screen in the center, similar to co-op bosses. This HUD has the same functionality as a player HUD. The HUD displays The Harbinger's current HP and current stacks of Famous Weakling Slayer. Hovering over the HUD will display The Harbinger's unit card, level, current stars, current wins, and active stock effects.

The Harbinger is immune to all effects that cause out-of-battle damage or cause instant KO. However, it is not immune to 'lose HP' effects, or effects that set HP to a certain value.