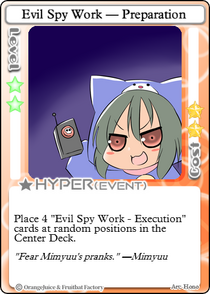 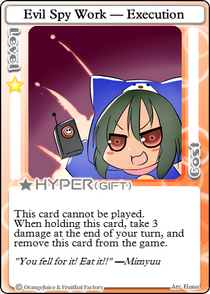 This card cannot be played.
When holding this card, take 3 damage at the end of your turn, and remove this card from the game.
Hyper Info
Effect Type
Gift
Level
1
Cost
0 ★
Symbol

Illustrator
Hono
"You fell for it! Eat it!!" -Mimyuu
Waruda Machine, Blast Off! 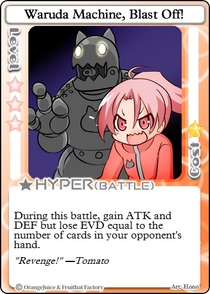 Tomato & Mimyuu have three Hypers, with one belonging to Tomato and two belonging to Mimyuu. Of Mimyuu's Hypers, one of them will generate copies of the other.

Mimyuu's main Hyper is Evil Spy Work - Preparation. When used, four copies of the Gift card Evil Spy Work - Execution will be placed in random positions in the center deck.
Mimyuu's secondary Hyper is Evil Spy Work - Execution. When this Gift card is held, at the end of the player's turn, the player will take 3 damage and the card will be discarded. This card is not able to be used. When this card is discarded, it is removed from the game rather than being sent to the discard pile. When holding this card, a

icon will hover around the player.
Tomato's Hyper is Waruda Machine, Blast Off!. When used, the player gains ATK and DEF but gains -EVD equal to the number of cards in the opponent's hand. For the purposes of this card, the number of cards the opponent has in their hand is determined before any battle cards are removed from the hand, meaning any battle card they play during the battle is counted.

Evil Spy Work - Preparation is a unique Hyper that centers around deck control. When using Mimyuu, the goal of the player should be to collect as many Hypers as possible. Like Hypers such as

Plushie Master, the Hyper grows in strength the more of them that the player activates during the game. Bombarding the deck with copies of Evil Spy Work - Execution can quickly make drawing a scary task for opponents, as each one deals a massive amount of 3 damage. This enables the player to have an easier time KOing opponents as Tomato, and the card can also be used to instantly KO Mimyuu with no penalty, allowing for a quick switch to Tomato in order to fight other players. The Hyper also increase Tomato's odds of drawing a Hyper due to her passive. As a result,

Passionate Research is a very effective card for finding a Hyper as Tomato.

Waruda Machine, Blast Off! is a powerful, stat-boosting Hyper that provides a large boost to ATK and DEF at the cost of EVD. The additional stats are added based off the number of cards in the opponent's hand at the time of activation, thus it is best used in tandem with cards such as

Scary Solicitation or after an opponent uses a card like

Present for You. The Hyper itself enables Tomato to easily overpower opponents and turn their greatest asset, their cards, into their own worst enemy. The Hyper is particularly potent against characters that can hold more than 3 cards, furthering its effect.

However, both Hypers feature crucial flaws that lessen their effectiveness. Waruda Machine, Blast Off!, while powerful, is based on the opponent's card amount, not the player's like

Blue Crow the Second, and thus is harder to guarantee results. The opponent will also have more counter options with more cards, and battle cards like

Reverse Attribute Field can easily deflect Tomato's Hyper. Evil Spy Work - Execution might also accidentally KO the opponent instead of simply damaging them, making them hard to KO, and helping them preserve their stars. The Hypers also work against each other in some aspects, as the player wants the opponent to have less cards so they cannot discard

Waruda Machine, Blast Off! needs for the opponent to have a full hand to be powerful. This can also be advantageous however, forcing opponents into a catch-22 where they will will always be affected by one Hyper or the other.