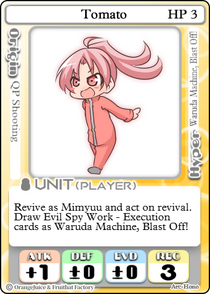 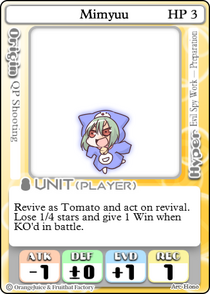 Tomato & Mimyuu (トマト Tomato) (みみゅう Mi myū) are two of the playable characters in 100% Orange Juice!. They were added to the game in DLC 9 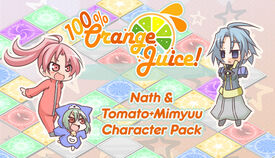 Tomato & Mimyuu are an extremely unusual dual-character requiring the player to switch between the two characters upon KO. On paper, neither character is particularly powerful and have very different builds, and as a result, the player needs to use each character to their strength for maximum effect. Their Hyper cards also revolve around this mechanic as well.

Tomato, is designed to be a combat based character. Tomato features low HP, an extremely low recovery value of 3 that enables her to rise quickly, and an above average attack for combat. While relatively frail, Tomato is very similar to Peat with an almost identical Hyper, designed for dealing massive damage to an opponent.

Mimyuu, on the other hand, is designed to collect stars and Hyper cards for the player to use. When in use, Mimyuu should actively focus on

Draw panels to find a Hyper card and then focus on

Bonus panels to pay for their activation. Mimyuu herself is designed to run from combat and be KO'd when necessary, as her slightly increased evasion helps her avoid attacks and her passive ability prevents much gain for the opponent when she is KO'd. Her recovery stat is also designed to instantly get the player away from the opponent that just KO'd Tomato by enabling her to rise instantly and run. The player should try to keep Mimyuu alive for as long as possible.

The main disadvantage of Tomato & Mimyuu is their complicated design. Many players simply do not know how to use the character, as the design is not cut and dry. The success of Tomato & Mimyuu is closely tied to the relationship between their Hypers and passive effects. The secondary weakness of the characters is their overall frailness. Bully characters like Star Breaker can easily steamroll the two if the opponent consistently rolls well, and field events like BattlefieldBattlefield
Every 6 Chapters, all

Encounter panels. This effect lasts for 3 Chapters. and Air RaidAir Raid
Every 5 Chapters, all units will take 1 damage at the beginning of the Chapter. can quickly KO the duo.