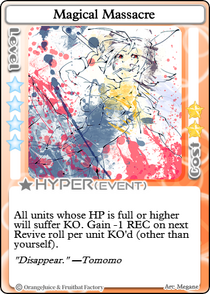 Tomomo's Hyper is Magical Massacre. When used, it will instantly KO all units whose current HP is equal to or greater than their maximum HP. This can also affect the player. The player gains -1 REC to their next revive roll for every unit KO'd by this effect.