Tragedy in the Dead of Night 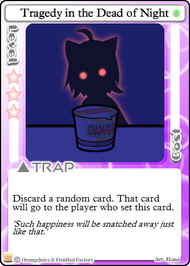 Discard a random card.
That card will go to the player who has set this card.
Level
3 ☆
Cost
0 ★
Limit
3 per Deck
Deck Points

0
Symbol
30px
Illustrator
Hono
Uncommon Card
Expansion Pack
"Such happiness will be snatched away just like that."

Tragedy in the Dead of Night is a 3-star trap card that steals a random card from the unit who lands on it and gives it to the player who set the trap.

At its core, Tragedy in the Dead of Night is basically an upgraded version of

Bad Pudding. Instead of removing the card from play, it gives the card to the player who set the trap. Depending on who lands on the trap, the outcome of this card varies wildly. At best, the player may steal another unit's hyper and be able to use it against them. At worst, someone with no cards can land on the trap or the player themselves can trigger it, effectively wasting it. The latter situation can make this card an effective tool for guarding one's

Home, as the trap only affects opponents and can potentially steal a norma-preventing trap card like

Sky Restaurant 'Pures' before the opponent can set it there.

Due to the random nature of its effect and being a trap card, Tragedy in the Dead of Night can be an inconsistent card. There are very few ways to influence who actually lands on it, outside of

Path Blockers or placing it on a

Home panel. Even then, there is no guarantee that it will steal a useful card from the victim's hand, if any at all.