Ultimate Weapon in the Sun

Edit
Ultimate Weapon in the Sun 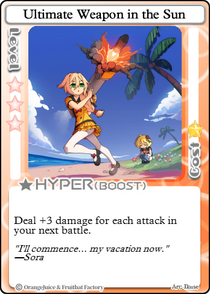 Ultimate Weapon in the Sun is a Hyper unique to the Attacker role in Co-op Mode. The player can substitute it for their character's Hyper card after reaching level 10 with the Attacker role. It is a Norma 3 boost card that gives the user +3 damage for each attack in the next battle the user is in.

Ultimate Weapon in the Sun provides its user with additional damage in battle. This card is best used by characters who have good stats for the attacker role, but have a hyper card that does not aid them in combat or are too restrictive to use. An example would be Shifu Robot. Unless a healer is reviving it regularly, it can be hard for Shifu Robot to gain enough HP to use

Turbo Charged. The player may prefer the fixed damage boost of Ultimate Weapon in the Sun.

This card is also good against Bosses with high DEF, as it causes damage to be added to your attack roll after damage calculation, regardless of your attack roll. This ensures that if an attack connects, you will always do a minimum of 4 damage. If used in conjunction with

Little War, it can allow the player to deal massive amounts of damage very quickly.

The downside to using this hyper card is that it will replace a character's existing Hyper. Many characters that do well in the attacker role already have comparably strong hyper cards that they may prefer over this one, such as Kae's