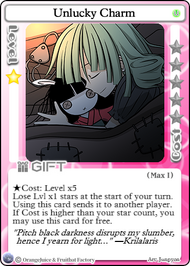 Lose Lvl x 1 stars at the start of your turn. Using this card sends it to another player. If Cost is higher than your star count, you may use this card for free.
Level
1 ☆
Cost
Lvl x 5 ★
Limit
1 per Deck
Deck Points
N/A
Symbol

Unlucky Charm is a powerful gift card that can quickly drain a player's stars. While held, the card causes the player to lose their norma level x 1 star at the start of every turn. The Unlucky Charm can be used to send the card to another player at random by paying their level x 5 to use the card. If the cost is higher than the player's current star count, they can use it for free. To discard this card, the player must have more than a full hand of cards or have a card effect cause them to discard it.

Unlucky Charm is arguably one of the most detrimental gift cards to the player unfortunate enough to be holding it, rivaled only by

Banned for Life. The card is much more difficult to get rid of than most gift cards, as playing it only hands it to another player, which means the card may go back and forth among the players multiple times before it is discarded. The most powerful aspect of the card is that, if the recipient does not already have close to a full hand of cards, the card places them in a catch-22 situation. The player can either hold onto the card and have their stars drained every turn or they can pay the price and play card. Either way, the star cost can build up and put norma out of reach, especially when the player has the exact amount of stars necessary to norma. It is often best to hold the card than to pay to get rid of it. For example, at norma 3, the player can either pay 15 stars to pass the card to an opponent or wait for 5 turns to pass before the same amount of stars is taken from them. As a result, the card is worth being held onto if the player can manage to discard it before the drain equals the payment cost. The card can also act as a disruption tool in some ways, as players holding Unlucky Charm will often aim for

Bonus panels if close to their

Home panel to maintain enough stars to norma or

Draw panels if they are not.

As one might expect, Unlucky Charm has multiple potential issues for any player that packs it. Firstly, if the card is drawn at the very start of the game, there is more or less a 100% chance the player who draws it is going to pass it to someone else. With so few cards in play at the match's start, it will likely get passed many times and result in a slow start to star collection for all players. Secondly, while the card does gain more strength the later in the game it is drawn, it also tends to be easier to get rid of. By norma 3-4 most players will have a hand of 3 cards, meaning they will be able to discard it immediately. Unlucky Charm also doesn't work as well on certain boards such as Clover or against field events such as MiracleMiracle
Every 5 Chapters, all

Double panels accordingly. This effect lasts for the duration of the Chapter., as it results in the presence of

Draw (x2) panels which make the card very easy to discard. Even MinelayerMinelayer
Every 3 Chapters, a Trap Card will be set on a randomly determined panel. These Trap Cards are not affiliated with the Center Deck, and will therefore not return to the Center Deck afterwards. The cards include:

Bad Pudding across the board. The card is also ineffective against certain opponents. For instance, Nico is notably immune to the card thanks to her passive. Star Breaker's inability to choose star normas makes this an excellent card to keep her star total at a manageable level in case another player manages to KO her. Users of her will often not care about star loss and will likely pay to potentially pass it back to the player. While not ideal, Unlucky Charm will also activate Tsih's passive and still enable her to norma, unlike many other gift cards. There are also a few cards that can be considered direct counters to the card such as

Santa's Job all of which can be used to help get rid of the card without payment.