100% Orange Juice Wiki
Register
Don't have an account?
Sign In
Advertisement
in: Level 2 cards, Event cards, Cards with no cost,
and 2 more 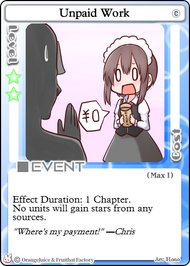 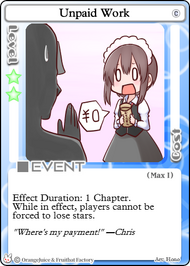 Unpaid Work is a collectible Event card that can be acquired from the Pudding Pack.

When used, for 1 chapter, no unit will be able to gain stars from any source.

Unpaid Work is the ultimate spite card, allowing the player to limit the stars gained by their opponents or even remove stars by causing stars dropped from battle KOs to disappear from the game. It can be played during a MiracleMiracle
Every 5 Chapters, all

Double panels accordingly. This effect lasts for the duration of the Chapter. event or while a player has

Nice Jingle active to prevent opponents from benefiting from the increased star gain. Playing this card while an opponent is bearing down on the player can give them a tough choice: do they KO the player but miss out on stars or do they wait a turn but risk the player escaping or counterattacking? True to her name, Star Breaker is perhaps the character with the most to gain and the least to lose from playing this card. This is due to her inability to benefit from the massive amount of stars she can accrue while KOing her opponents. Star Breaker can use Unpaid Work as a means of keeping her star total at a manageable level so she doesn't accidentally give an opponent a huge lead if she gets KO'd. She can even go as far as to play Unpaid Work before KO'ing an opponent with many stars or even KOing herself in battle to remove a large number of stars from the game.

Characters that depend on stars as a win condition may want to not bring this card, as it makes it harder for them to win. Hyper cards like

Cooking Time become far less effective while Unpaid Work is active, which can cause the player to miss out on a chance to gain a bunch of stars.