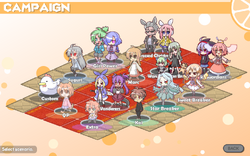 Campaign (also known as single player) is an offline game mode in 100% Orange Juice! that can be accessed from the main menu. Upon reaching the menu, the player will have two options to select from: play a custom game or play one of the 8 campaigns available.

Custom mode is a separate, storyless mode within campaign that features almost all of the gameplay settings of online mode but in a solo setting with CPU opponents. Often when players refer to "single player" they mean custom mode unless they explicitly say "campaign".

Similar to online, this option enables the user to play games in any of the permanent or temporary event modes, with field event and board settings of their choosing. The mode does possess some minor differences from online, however. Given that that CPUs will never delay, there is no option for turn timers or game speed. There also is no chat box at the top of the screen, as the CPU will never speak. Custom also provides certain benefits to the player, as well. The main advantage of custom is that it enables the player to spend as much time as they want to construct a deck, as there is no 85-second timer on the deck building screen, like in online. This will enable the player to build their deck and save it, so that they may simply select it later on. The player will also be able to tailor matches to see what strategies and decks work and don't work before entering online play. An additional benefit to this mode is that it also enables very fast play through the use of the control and shift keys, which can be used if the player is short on time or wants to perform quick tests. It should be noted, however, that custom games do have their limitations. Custom games are not calculated toward daily challenges and thus cannot be used to get

Oranges, however, matches in this mode do award the player with

Stars which can be used to make purchases in the in-game shop.

The player should be aware that while custom mode works in any mode, the player will only receive full rewards if they do not speed up the game using the shift or ctrl key- this includes both event modes and co-op role EXP growth. The decrease in rewards is based on the number of frames skipped over the total length of the game. Thus if the player skips 70% of the total frames, they will only receive 30% of the rewards/EXP.[1]

In the case of events, if the player uses these keys during an event, the amount of currency (such as

Christmas Wreaths) and drop rates for bonus items/random drops will all be substantially reduced at the end of the game, even if the player wins. This also affects events that have the player collect objects from the board (such as Chocolate). In this case, the amount is subtracted from the player's supply at the end of the match, with a "speed adjustment" note. 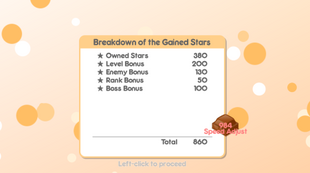 *Note: The remainder of this page will be referring to the storied campaigns, not custom mode.

Campaigns are pre-set scenarios that make up the story mode of the game. Each of the four starting characters (Suguri, Marc, QP, and Kai) have a 6-episode story for the player to complete including an extra level that is unlocked from completing the story. The player can also unlock 6 additional campaigns by purchasing DLC 7, DLC 13, DLC 19, DLC 25, and DLC 26. However, the DLC campaigns can only be played after completing at least one base-game campaign.

Each episode of a campaign features its own unique intro cutscene, board intro theme, board, field events, CPU opponents, and ending cutscene. After selecting an episode the player can either play with the character provided or they may change their character to whichever one they would like to use, which may affect who the opponents are. The player must complete each episode in first place, using either wins or star norma to progress to the next level. By completing each level, the player will gain stars which can be used to purchase items in the shop, and can also obtain boards for free, and unlock characters from campaign mode for purchase. There also certain cosmetics and achievements that can only be unlocked by completing all of the campaigns. Similar to custom mode, however, campaign games are not calculated toward daily challenges and thus cannot be used to get

Campaigns are largely unaffected by special events. When major seasonal events such as Halloween and Christmas occur, the special gameplay changes are not included in any of the campaigns. Only specific event rewards can be unlocked in campaigns; the player must be in an online game or custom mode to progress in the event or receive any other rewards.

Before selecting a campaign, the player can select one of 4 different difficulty settings: Casual, Normal, Original, and Extreme. Each difficulty has it is own system and tweaks the game to make it more challenging by rigging the RNG of dice rolls. It should be noted, however, that the player's dice rolls are never rigged to be worse and always have the same RNG regardless of the setting. [2]