Multiplayer enables multiple players to play together over the Steam network. Multiplayer is accessed from the Free Play menu. One of the players in the game must create a lobby and act as the server. The rest of the players can join that lobby as clients.

If you create your own lobby, you can decide on which map you want to play on. More map choices will be available to you depending on your campaign progress. You then need to give your lobby a name for all Steam players to identify it with. You can then click OK, your lobby will be created, and you will be taken to the Game Lobby screen to wait for other players to join. Other players will see your lobby listed on the connect screen. 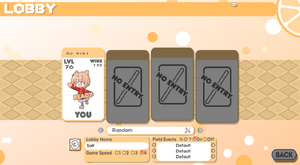 Once the player has created a lobby, they will become the host and keep their ability to adjust the lobby's board, field events, and game speed. The player can then start the match without other players present (however their win count will not change if they are victorious) or they can wait for other players to arrive. If other players arrive, the host will not be able to start the game until all players are ready.

The player can also send a friend request to an opponent, using the "friend" button above or below the character image. As host, the player also has the unique choice to kick another player. If a player does not declare they are ready for a certain amount of time, the player will be able to kick the player from the lobby to begin the game. It should be noted that the option to kick is not available during the actual match, however.

The player will keep the above privileges as long as they are the first player in the lobby. If the player loses connection and reconnects, they will no longer be the lobby owner. Leadership will move to the next person in line as player's leave the lobby. When no users are present in the lobby, the lobby will cease to exist on the connection screen.

When a player decides to join a lobby instead of creating their own, they are taken to the lobby connect screen. Once at the screen, the player will be provided with all of the basic information about the lobbies available. The player should pay close attention to the status, if they are looking for a room that is not in game. Once in a lobby, the player will only be able to state they are ready, and will not be able to adjust game settings like the host. The player will also be able to send a friend request to an opponent, using the "friend" button above or below the character image.

While playing a match in a public multiplayer lobby, the time each player can spend taking their turn in multiplayer is limited, to discourage walking away in the middle of online matches and making others wait. When that time runs out, the computer will play for the player. If the player times out three times in a single match during a public game, they will be kicked out. The player will have 60 seconds to play their turn, 40 seconds to defend on other players' turns if they are attacked, and 20 seconds to roll when they are KO'd. These time limits do not apply in private lobbies. 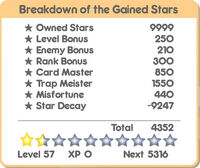 After a match completes, all participating players will gain experience and a total point amount which serves as stars

the player can use in the shop. The winner, by default, gains more experience than others. The experience everyone gets depends on various factors, but in summary, the better your success, the more experience you get, even if you don't win. By gaining certain amounts of experience, you level up, and at certain levels, you unlock new items at the shop to use in both multiplayer and single player and even shop price discounts.

Note: Players should discuss in the chat to find out which player is controlling the stuck character since if the problem's on your side, you will likely be seeing the game stuck on the wrong player.

This tip should be followed at all times if the player wants a full room. Speed 4 makes the animation speed faster for movement, dice, etc. As a result, it is best practice to make the speed 4, as slower speeds will make the game take substantially longer just from waiting for the animations (something that many players don't want). If your lobby won't fill, it is likely because the speed is too low.

No one wants to be in a lobby with someone writing cruel or disgusting things in the chat for any reason. Whether it's trolling or not, it should always be remembered that there is a person on the other side of the screen who might not see the "humor". People of all ages play 100% Orange Juice! and for the best experience online, users should create an inviting atmosphere.

There are some very common text phrases used in OJ matches that all players should know, just so there isn't much confusion. Many of them are basic.