The Online mode of 100% Orange Juice! allows players to join multiplayer matches over the Steam network.

A lobby is a virtual representation of the connection between players. Each lobby has 8 member slots (4 players + 4 spectators); the player in the first member slot is generally referred to as the lobby host.

The player may choose to create a new lobby instead of joining one. Clicking the Create button on the Connect screen will take the player to the Lobby Config screen. In addition to the standard match settings (game mode, map, field events), the player can name their lobby, adjust the game speed and turn timer settings, and optionally set a password. The player can then click the OK button to create the lobby. All settings may be further adjusted by the lobby host after the lobby is created.

As an alternative to searching for a particular lobby, players can be invited to a lobby using the Rich Presence feature of the Steam and Discord desktop clients. Invites work on desktop only (not on mobile or web), and include all information needed to connect to a lobby except for the lobby password.

To begin a match, each person in a player slot (other than the host) must click the "Ready" button to indicate they are ready to begin. When all players are ready, the host can click the "Begin" button to begin the match. All players go to their own Deck Builder screen to select a character and cards to bring to the match.

When Co-op mode is selected, two additional interface elements are added to the lobby. First, an

icon is displayed below each player's avatar; hovering the pointer over this icon displays the player's role levels. Second, the Deck Builder screen displays the characters, roles, and role levels being selected by the other players.

To prevent complete character bias, online play makes adjustments to some character stats. Currently, only one character is adjusted this way:

Online matches are usually timed to discourage long periods of waiting. Timed matches feature a timer as an additional HUD element when waiting for a player's action; if time runs out, the CPU will act on the player's behalf. The lobby host can configure the turn timer in the lobby's settings, or in the game's configuration. There are four types of actions that prompt the timer:

If a player times out during their turn three times, the player will be automatically ejected from the lobby. The empty player slot will be controlled by the CPU until control is given to a spectator.

Desync is a condition where the game state differs between players due to an error in the network connection. Desync is uncommon, but is more likely to occur with a poor connection between players. The effects of desync can vary greatly, but the most common effect is a soft lock. 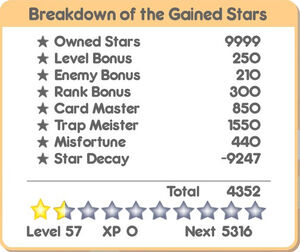 After finishing an online match, the player earns bonus

Stars as in any match, and also earns online experience points (XP). The amount of XP earned is 1.2 times the amount of bonus stars earned, plus an indeterminate amount when playing with higher-level players.[citation needed] All earned XP is accumulated in a running total in the player's Steam stats.[note 1]

The player's online level starts at 1, increasing as XP is accumulated. The total amount of XP needed to reach online level L is calculated by

. For example, reaching online level 4 requires 700 + 800 + 900 = 2400 XP. The online level is displayed toward the upper-left corner of the player plate in lobbies, and also on screens where it is relevant (such as the Shop).

If the player has any

Exchange Coupons, completing an online match will exchange one coupon for 3

Arcade Tokens. Unlike all other online-based rewards, the coupon-to-token exchange does not require playing with other human players, but does require playing in a lobby.

Historically, event-exclusive currency could only be earned from online matches, or was earned in much greater amounts compared to single-player matches. This has since changed so that online and single-player have identical progression.

Progress toward Daily Challenges can only be obtained in online matches. Additionally,

Oranges and other rewards from completed challenges can only be redeemed in online matches.

Several cosmetics have a random chance to be received after finishing an online game in any mode. The random drop chance is determined independently for each cosmetic type, meaning it is possible to receive multiple random drops from a single game.

Historically, event-exclusive random drops could only be earned from online matches, or had a much greater chance to be earned compared to single-player matches. This has since changed so that online and single-player have identical progression.