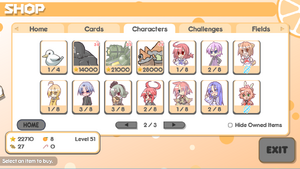 The Character section of the shop.

The Character section of the in-game shop sells all characters in the game, including DLC and NPC characters.

Playable Enemies are modified playable versions of the NPC characters fought on Encounter panels. Though they do not require DLC to unlock, they are also not considered base game characters, as they are only unlocked through online play. While visible in the shop from the beginning of the game, they only become available for purchase as the player raises their level by playing online multiplayer games.

Though DLC characters appear in the shop, they must be purchased through Steam in order to be unlocked. Once the DLC is purchased, both characters are automatically unlocked and ready for use, available to the player free of any star price.

Bonus characters are unique characters that are awarded to the player for owning other games created by the developer, Orange_Juice. Though bonus characters appear in the shop, certain Orange Juice titles must be owned on the same Steam account in order to unlock them in the game. As long as the title is owned, the character will be automatically unlocked and ready for use, available to the player free of any star price.

NPC cards are cards featuring the original stats of the NPC. They will appear in the shop as you play games.