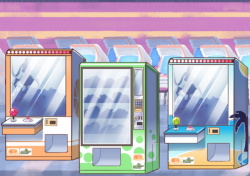 Arcade is a section in the shop where a player can acquire pets and consumable animations for matches. The Arcade has four options, the Pet Catcher, Summer Pet Catcher, Pet Exchange, and Vending Machine. The items earned here are unique in that they utilize the Steam Marketplace and are stored in the player's Steam Inventory.

The Arcade is primarily used with a currency called

Arcade Tokens. Every week on Monday at 1:00 AM (PST), the player will receive 15

Exchange Coupons in their Steam Inventory, an item which is converted into 3

Arcade Tokens upon completion of an online game. Un-converted Exchange Coupons from the previous week are not carried over to the next week. The Arcade can only be used with these tokens, which limits the number of activations each week. 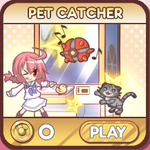 The Pet Catchers, symbolized as an arcade crane game, are more or less gatchapon vending machines with a selection of random rewards inside.

Arcade Tokens, and items within a Pet Catcher have different rarities which affect how likely the player is to get it. All consumable animations are of Common rarity, give 2x of the won animation, and also reward the player with 10

Oranges for use in purchasing crates or hair colors. All pets are of higher rarity and the player will only receive one. 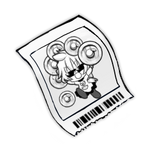 The Pet Catchers also contains a pity reward system for players with particularly bad luck. If 10 Common-rarity items are won from the Pet Catchers in a row, an item of higher rarity will be automatically granted, with much higher odds than typically given. This system is represented by an item called a Receipt, which is added to the player's Steam Inventory upon winning a common item. All receipts will disappear either upon winning a reward that is above Common rarity, or upon accumulating 10 receipts. Once 10 receipts have been obtained, an item above Common rarity will be immediately rewarded by Nico or Arthur.

There are two different types of Pet Catchers; the standard Pet Catcher and the Summer Pet Catcher. These Pet Catchers operate identically, with the only difference being which prizes can be won from each machine. 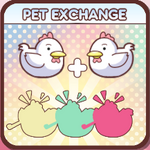 Oranges in order to directly purchase Common-rarity items, rather than winning them from a Pet Catcher. Each item costs 20

Oranges, and there is a 1-minute cooldown on buying items of the same type.

Consumable animations are frivolous items which can be used during a match.

Pets are cosmetics which stand alongside your character and follow you during a match. They each have a unique set of poses to match your character's.

Some pets aren't obtained from the Arcade, and are instead acquired by other means.

As the topic has been broached in multiple instances on the Steam Forums, the player should be aware that some OJ items cannot be removed from their Steam Inventory. Consumable animations can be spent, tickets and receipts can be used, most pets can be traded away or sold, but special pets are listed as "Not Tradable" and "Not Marketable" and thus cannot be traded or removed from the inventory. This measure was added as the developers want to prevent cases where users accidentally remove rare items in their inventory since there is no way for the developers to return the items to the user.[2] As a result, the developers will not and cannot remove Steam Inventory items on request. If the player truly wants to avoid inventory deletion issues, they will want to avoid using the Arcade all together, avoiding purchasing DLCs that contain special pets, and miss game events on purpose using the wiki's clock to know when the event has ended.

However, if the player is having legitimate issues with the Steam Inventory (items not stacking properly, etc.), they are welcome to request help from the developers on the Steam Forums or on Discord.