This is Zomoroko's talk page:
•Please sign your posts by typing four tildes (~~~~).
•Put new text under old text. Click here to start a new topic.
•Feel free to ask me anything!~ 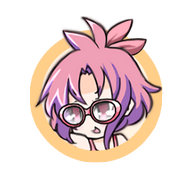 Jasper, the full solution to the issue of the retired cards is to make a separate group called co-op cards with all 5 role hypers. (Speaking of which the new role needs to be updated on the co-op page). The original co-op cards need to be overwritten with their new co-op counterparts which have already been uploaded to the wiki. This would be done by removing the (co-op) tag on the card and overwriting the old card. The version we currently have posted is retired: 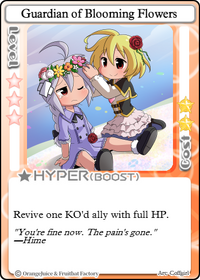 I'm currently workshopping a version with co-op cards right now actually (See User:Zomoroko/sandbox9; feel free to edit that at your leisure btw). However, I don't believe we should overwrite the Beach Party hypers as they are not retired. They are still able to be viewed in the Binder under the Normal section, and they have their original Beach Party descriptions and are separate from the Co-op Hypers. Here's a pic I took just now showing you what I mean: Image. Thus, they are akin to other event cards that are no longer in use but can still be viewed in the binder (such as Sweet Battle) and I think we should keep both versions of the image. Perhaps instead of [card name].png and [card name] (Co-Op).png, we could do something like [card name].png and [card name] (BP).png so that the co-op version of the card takes precedence. However, again I feel we should keep both versions of the cards as images and list one version as Season Event Cards and one as Co-op cards. Zomoroko (talk) 18:04, 23 July 2019 (UTC)

I see. Standby Jasper. I have notified Phle. The fact that the card exists in the binder let alone the normal side is very possible an unpatched error, since Phle told me the card has been replaced. If Phle declares it an error to be patched out, we will remove it, if it is kept in the binder we will go with your plan. I will let you know when I know. Hopefully, that seems fair. That said if we go with your plan I still think it should be deemed retired as it is not seasonal- the cards will never be played again because there is no access to them. Also, I approve of the co-op card tab.
Shockbowlocke (talk) 18:16, 23 July 2019 (UTC)

No news on the previous post yet. They are deciding. Might want to get ready though as more is on its way: https://imgur.com/a/AyJoVCe Beach Party will return. Shockbowlocke (talk) 21:37, 28 July 2019 (UTC)

Hey Jasper, I see you tweaked the pages now that retired events has been added, can you adjust the arcade as well, as some of the pets are now buyable. Whether you want to make a new table, change what is already there, etc is up to you. Just make sure it looks good. Again though, only if the opportunity presents itself. Also, I tweaked the page by adding a tabber within the main page for the machine pet drops and finally replacing the old picture at the top (though I was a bit sad to do so). I think the tabber helps a lot. The page is honestly just too dam long and I need to overhaul it again at some point.
Shockbowlocke (talk) 21:38, 19 January 2020 (UTC)

Sorry for the late response, I did see this when you posted it but didn't make the edit instantly as I was having trouble coming up with how to incorporate the new info into the table. I think I've now found a nice solution and have made the requested edit. So, just to clarify, I do always see things that are posted here on my discussion page so you don't have to worry about that, and I will make sure to be more prompt with my replies in the future. Zomoroko (talk) 19:40, 26 January 2020 (UTC)

Hey Zoe, I'm doing less on the wiki right now as I'm doing my best to pull away again, but I wanted you to know where my head is at atm. Essentially since we are breaking things apart for better longterm viability, I am thinking currency should be broken up. Between the whole messy currency page (which also includes things that aren't really currency on the page) and oranges and stars sharing a page, I'm thinking like warframe's wiki we can eventually make a category currency User:Supersonic Boy/sandbox02 and then eventually (very rough cut) make currency pages User:Supersonic Boy/sandbox04 which will include when the currency is available/how it's received and in the case of wreaths and candy, what can be purchased with it (likely using the same template used on the future shop page). Also, I wanted to make a comment on your current color pack project. I don't think "Unit Color" needs to be capitalized. We didn't on accessory pages, and it just seems kinda silly to me. I dunno. Anyway keep it up and don't forget to add normal Aru to your school color page. Shockbowlocke (talk) 15:01, 19 February 2020 (UTC)

Alright, thanks for the update. I appreciate you letting me know what your plans for the wiki are so that I may help work towards those goals as well. :) I agree with breaking up the currency page as I also think it is quite messy. If you'd like to completely pull away from the wiki, I'll be sure to add constructing the currency pages to my list of priorities. Also, I will be sure to do those things with the Unit Color pages while I continue to work on them. Zomoroko (talk) 01:45, 20 February 2020 (UTC)

I just read through the Old Guardian Campaign's script, so I get what you're saying now. That said, Sumika being referred to as the "Puyo Puyo Mascot" is a gag. It's not who she is. Yes, Suguri (46 Billion Years)'s info page specifies that she's known as the Forest Witch, but that's a title, not a literal statement. Sumika is called the Puyo Puyo mascot because that's what people mistake her as, so it shouldn't be on her info page. After all, Poppo's info page doesn't say that she's Mikky Mousse. I think the key here is that it would confuse newcomers without any additional explanation. A good compromise would be to move that to her trivia page and explain why she's called that. Gm3826 (talk) 08:50, 3 March 2020 (UTC)

Just because it is played for humor doesn't mean it isn't a legitimate title on the same level as Forest Witch, though. Not only is "Puyo Puyo Mascot" shown on her nameplate, but she even refers to herself as Mascot at the end of the campaign. With regards to your concern about it being confusing, I feel as if including all major aliases of a character adds clarification in keeping track of who is who. I don't feel like it belongs in Trivia, as she is referred to as Puyo Puyo Mascot pretty consistently (when not alone with Suguri). Zomoroko (talk) 10:21, 3 March 2020 (UTC)

If so, I don't really have too much room to dispute putting the title on her info page. That said, there's a reason I thought it was vandalism. It only clarifies things if you're already aware of the context. Can I at least add something to the effect of "she is known as the Puyo Puyo Mascot because others thought she was" to her trivia page? I get that it would bloat the info page, but I feel like this is going to be a recurring issue if that context isn't given. Gm3826 (talk) 10:42, 3 March 2020 (UTC)

Sure, go for it. I agree it's important to clarify things that might be confusing, so I appreciate you bringing this up. And of course, thank you for your help with editing the wiki.~ Zomoroko (talk) 12:48, 3 March 2020 (UTC)

Campaigns being worked on?[]

Hello, How are you doing? ^__^ Are single player campaigns still a work-in-progress/being worked on? Like, for example The Old Guardian Pack chapters? Protaygo (talk) 06:43, 12 March 2020 (UTC) Protaygo.

Hello!! I'm doing nice.~ Regarding the campaign pages, yes! Revamping the old campaign pages and doing write-ups for the newer ones is something that's been on our to-do list for a while, so it hasn't been forgotten! However, it is true that we have been neglecting to work on those pages in favor of other sections of the wiki. I will be sure to make the campaign pages a higher priority for us to get around to doing. Thanks for contacting us!~ Zomoroko (talk) 11:08, 12 March 2020 (UTC)

I've now finished majorly updating all campaign pages!~ They've all been revamped to have fully detailed and in-depth information, and are now fully complete, other than some strategy write-ups and images. Hopefully, we will be able to get those sections finished eventually as well. Hope you enjoy! Zomoroko (talk) 20:35, 13 March 2020 (UTC)