The new character pair comes fully voiced and ready to put on a live concert!

Can only choose Stars norma. Gain X additional stars from all sources, where X is the number of different Event cards you played. In battle, randomly gain +1 ATK or DEF.

Go to Live Mode for (your Lvl) turns. Gain MOV -3, can only trigger movement type panels and cannot use cards. Cannot be challenged or be the target of Boost cards. If an opponent ends their turn in 2 panel radius, steal (your Lvl) x5 stars from them. Ends on KO. 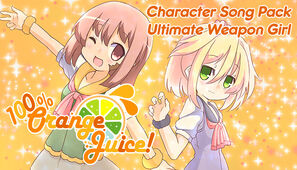 Wiki note: This patch note is a typo; the pack was actually lowered to the price of 580 stars.