Awesome news, everyone! Two new characters have just been added to the game: the hand-puppet wielder Yuuki and the free-spirited pilot Islay. Both new characters come fully voiced!

The new character pack is now available for purchase with a -10% launch discount!

Lower a random player’s HP to 1 and gain 10 stars per lowered HP. In odd-numbered chapters, this card turns into Angel Hand.

Cannot challenge other players when meeting them on the field. 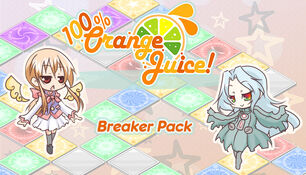 In addition, the long-awaited voices for Star Breaker and Sweet Breaker are now live for owners of the 100% Orange Juice - Breaker Pack!

As before, anyone who previously purchased the DLC will get the new voices free of charge. The base price of the DLC has been increased by $1 to account for the voices.

You can also check out these new voice trailers for Star Breaker and Sweet Breaker:

The new characters and voices come as part of 100% Orange Juice version 2.4.1, which also adds several quality of life improvements.