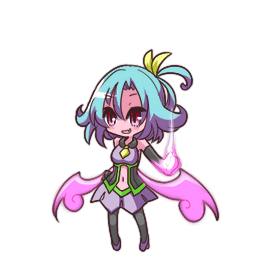 In celebration, the boss of the "Master of the Minions" storyline, Mio the Magical Devil has now been added to the game as a free character for all players! In fact, the whole storyline starting with "Minions of the Master" event has been designed with this eventual goal in mind!

We want to extend our thanks to all of you for your part in keeping the 100% Orange Juice community growing (and amazing)!

For the duration of the event, simply participate in it to receive the rewards, including unlocking the new Extra Mission, "Mio's Dark Citadel", which will unlock's Mio as a playable character, and her voice and announcer options upon completion.

Mio is voiced by Izawa Shiori (possibly best known as the voice of Nanachi in "Made in Abyss" and Kafuru in "Senran Kagura"). We hope you'll enjoy her performance!

After the event ends, she will be made unlockable as part of the core game through certain steps.

We hope you will enjoy the thrilling event ending, with another stellar ending illustration by Kagawa Yusaku as well.

While Hime is generally good all around, as Sumika became the third character with the same base stats as her (for lore reasons), we felt we wanted to make her Hyper a little more distinguished. After long deliberation, we decided to emphasize the binding factor of her Hyper more by separating the -2 EVD into a separate debuff that lasts an extra chapter, and applies -1 MOV as well. This should make it more effective in hunting down players when the first attempt was foiled by a bad move roll.

As Mio the Magical Devil took Tomomo's place as the new big bad, we felt her hyper is a bit too lackluster through a critical lens. The effect itself is strong, but as it only has a minimal benefit to Tomomo, it doesn't usually justify a high star cost, and they mostly go unplayed. This star cost should bring the hyper more into play and let Tomomo spread the terror she should inspire more. Of course, this also makes her slightly harder in the campaign, but that's just an added perk and totally not our intention. Note that the cost reduction does not apply in co-op, where her hyper works in a very different way and is already very powerful.