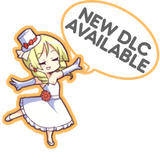 The news you have all been waiting for... the two princesses are making their debut!

The reimagining of the graceful guardian from the 'SUGURI' series is voiced by the returning talent Motomiya Kana, the voice of Aru and Hime!

On successful Evasion, deal damage to the opponent equal to what you would have taken from them. If used by Hime (Moonlight) during full moon (every 5 chapters), deal double that damage but cannot use the Defend command.

This new, slightly older and wiser version of Fernet is based on her growth after the default ending of Flying Red Barrel! She is also visited by a returning talent, Aranami Kazusa (Tomomo, Tomomo Casual&Sweet Eater, Fernet)!

Any player challenging you on the field must pay their Lvl x Stars to do so.

Stock Effect: All opposing units randomly gain -1 ATK, DEF or EVD during their next battle. If held by Fernet, this card can be transformed into "Affluence (1)" instead.

If this card is Affluence (4): Active players challenge you in a random order. They gain -3 ATK. If you are not KO'd, opponent gives you (their Lvl) x 10 stars. If not Affluence (4): Upgrade this card. If not held by Fernet, this card becomes New Nobility.

We hope you'll enjoy the gameplay of the two cute princesses!

At the same time, the Yuki & Tomomo Renewal Pack has been updated with new, unique voices!

The gun-toting cat from QP Shooting - Dangerous! is getting unique new character and announcer voice lines by Aiya Saki, who returns to her classic role as Yuki (Dangerous)!

The two-in-one Tomomo is also getting all-new character voices for both Casual and Sweet Eater versions, and a new Tomomo Casual announcer voice, with Aranami Kazusa revisiting the role!

As with previous updates, all owners of the Yuki & Tomomo Renewal Pack on Steam receive the new voices for free, and the price of the DLC will be later increased by $1 (or applicable).