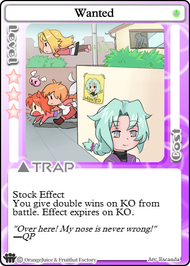 Wanted is an underused but powerful trap ideal for any character aiming for wins norma. With the exception of characters like Mimyuu and some playable npcs, most characters will give 4 wins upon KO. As to be expected, this trap can be extremely beneficial in the hands of Star Breaker, Tomomo, and any character seeking wins. As the player will need 4 KOs or 70 stars to be a high enough level to activate the trap, the card is used later in the game and meant to help the player quickly achieve the last KOs. Moreover, the player will be able to gain more wins from an opponent than the 3 provided from the much riskier boss, and be able to chase the target instead of hoping they will land on the

Unfortunately, the card does have some key drawbacks, due to its nature. As the card is a trap, the player will need to place it on an opponent's

Home panel to maximize the possibility of the opponent landing on it. This would still not be guaranteed to hit the player, as the wrong opponent may still step on it if they roll onto the other opponent's home. The card's strength is also its greatest weakness. The trap essentially puts a crosshair on the back of any player unfortunate enough to land on it, meaning even characters that normally would not attempt combat will try to KO the victim of the trap. This can cause an even worse situation if another opponent gets the card and uses it on the player, as the predator will more or less become the prey.