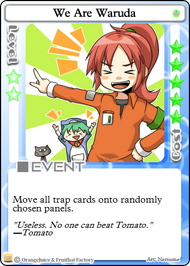 We Are Waruda is a 2-star event card that randomly moves all traps on the board to different panels.

We Are Waruda is used for two purposes: to move traps away from an important panel, such as a

Home panel, and to reposition and scramble existing traps to better locations. The former is the most widely applicable use of We Are Waruda, and is the reason most characters would want to bring it in their deck. Most characters can run a copy if they are worried about traps such as

Sky Restaurant 'Pures' being set on their

Home panel, as it will be wisked away to another space for a mere 5 stars. We Are Waruda is also an important card for characters with trap-spamming hypers such as Krilalaris and Star Breaker. They can use it to reroll their trap positions in the event that they were placed poorly due to RNG. In addition, any other traps placed will be scrambled among their traps. While this does mean that Krilalaris and Tequila will not know which traps are theirs, the same is true for their opponents and the effect is much more substantial for them. Good luck finding a

Piggy Bank in that mess. Lastly, the Cuties can include this card in their deck as a low cost, low risk event card to boost their passive star collection.

Unfortunately, due to the random nature of We Are Waruda, there are times when even characters who usually benefit from its scrambling effect will find their traps moved to unhelpful places. Once scrambled, players run the risk of triggering their own traps, which can be especially annoying for traps such as

Tragedy in the Dead of Night that accomplish nothing if the user lands on them. Characters who depend on targeted trap placement like Saki will suffer if this card is played. For 5 stars, it ruins all of their hard work and turns the rest of the match into a game of

Big Bang Bell Russian Roulette. This card can also cause problems for Arthur by moving his