Xmas Shooting - Scramble!! (くりすまシュ～SCRAMBLE!!) is a single player video game developed by Orange_Juice and published by Fruitbat Factory. It is a remake of Christmas Shooting and the fifth game in the Shooting Series.[1]

Xmas Shooting - Scramble!! was released in Japan on August 23rd, 2015 during the third day of Comiket 88[2][3] and was digitally released on DLsite on the same day.[4] It was the twelfth and latest game developed and released by Orange_Juice.[5]

It is Christmas, the night of miracles, and Aru is in charge of delivering presents to children around the world. However, an someone stole all of Aru's presents. So in order to get them back, Aru and Rein, with Rein's heightened sense of smell, sets off to find the presents.

Aru finds Natsumi and accidentally reveals herself as Santa, which she is not supposed to do. Natsumi is excited that Santa is here, she needs her for something. Aru accuses Natsumi of being the thief, thinking that Natsumi is here to take Aru as well. Natsumi does not understand the situation but she states that she does want to take Aru somewhere. Aru takes this as a confession and attacks Natsumi, stating that she will show no mercy. During the fight, Mei arrives wondering what Natsumi is doing. Mei is impressed that Natsumi is playing with Santa on Christmas night and wants to join in. Mei calls upon Red and Blue and the fight resumes. After the fight, Rein tells Aru that Mei and Natsumi do not smell like the stolen presents, smelling the scent elsewhere. Aru and Rein quickly leave the scene, following the scent trail. Natsumi talks to Mei, telling her that there will be a party and wondering if she would come, to which Mei agrees to. Natsumi reveals that she wants Santa to come to the party, only realizing now that Aru is already gone.

Aru and Rein eventually find Kiriko who is chuckling to herself. Kiriko guesses that Aru is Santa based on her attire and that she is accompanied by a reindeer. Kiriko introduces herself the intelligent elite of the Warudas. Kiriko hates that Santa only delivers presents to good children and not bad children like the Warudas. Aru suspects that the Warudas are the ones that stolen the presents. Kiriko plans to force Aru deliver presents to all the bad kids, leaving none for the good kids. Aru calls Kiriko wicked and attacks her, for the sake of the good kids. After beating Aru, Kiriko is in disbelief that she lost to someone like Aru. Aru demands her presents back from Kiriko but Rein once again states that Kiriko does not smell like the presents either. Kiriko taunts Aru for losing her presents, saying how Aru is now just an ordinary person in red and that good kids will cry. Kiriko's taunting causes Aru to sob uncontrollably.

By the time Rein tracks the end of the scent trail Aru finishes her sobbing from earlier. The scent leads to Nico, she introduces herself stating that she hates Christmas and Santa. Rein confirms Nico as the one who stolen the presents, this embarrasses Aru since a little girl caused her so much trouble. Aru asks for her presents back, to which Nico refuses to do, saying that the presents are the source of her misery. Nico's parents run a toy store and it is not doing so great in sales. All parents do not usually buy toys for their kids which hurts the store's sales. Nico explains that if Santa does not exist then parents would have to buy from toy stores for their children, solving Nico's parents. money problem.

Unable to defeat Aru, Aru urges Nico to give up. Aru offers Nico help, together they can come up with ideas to increase sales on toys. Nicos refuses Aru's offer stating that as long as Santa exists, toy stores will continue to suffer. Nico tries to destroy the bag of presents but Rein protects the bag from Nico's attack. Injured, Rein returns the bag to Aru. Aru tells Nico that if she fails to deliver the presents then kids will be sad. Nico says that she knows kids will be sad, she is still sad herself, she never got what she wanted last Christmas. What Nico wanted was a present from her parents, not Santa because her birthday is on Christmas. Nico still sees Santa as the source of her misery and resolves to fight Aru again. Aru understand's Nico's situation fights back not only for Rein and the children but for Nico's sake as well, wanting to save her.

Defeated by Aru, Nico falls unconscious. Nico remembers a previous Christmas where she received three presents. Two presents from her parents for her birthday and a present from Santa for Christmas. Nico thanks her parents and Santa for receiving a lot of presents. Nico wakes up from her flashback, with Aru beside her. Nico asks her why she is still here and not delivering presents. Aru says that Santa could not leave a crying girl alone. Nico tells Aru to hurry and go or she won't be able to finish delivering in time. Aru asks Nico for her assistance on delivering the presents, since Nico was the cause of this mess. Nico tells Aru that if she does not make it in time, it wouldn't matter to her anyways. Aru gives Nico an intimidating stare and asks her to help again. Aru says that once this finishes, she will help Nico's parents' store since she is a toy professional. Nico agrees on Aru's offer and helps Aru and Rein deliver the presents to children around the world.

On Christmas, the night of miracles, someone has stolen all the presents that were supposed to go to the children around the world.In order to get them back, Aru, the bunny-eared Santa, has taken off into the sky, following a subtle trace of the presents.

Help Aru save Christmas in this humoristic, action-packed shooter set in the universe of QP Shooting - Dangerous!! 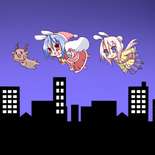 The view of a city in Xmas Shooting - Scramble!!

Xmas Shooting - Scramble!! takes place in the same world as QP Shooting - Dangerous!! which hosts a modern society with cities and vehicles. Animals are anthropomorphized such as Aru and Nico and they coexist with humans, with other animals still existing as regular animals such as bats and reindeer. In this world, some people and animals are able to fly, Aru is seen flying through the entire game, so much of the game is airborne. The game takes place during one night, the night of miracles, with all of the stages having a winter theme.