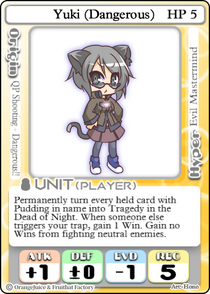 Base Stats
HP
5
ATK
+1
DEF
±0
EVD
-1
REC
5
Passive
Permanently turn every held card with Pudding in name into Tragedy in the Dead of Night. When someone else triggers your trap, gain 1 Win. Gain no Wins from fighting neutral enemies.
Basic Info
Origin
QP Shooting - Dangerous!! 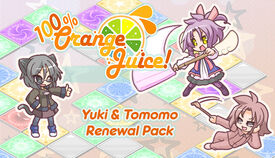 Theme
▶️
For the alternate version of this character, see: Yuki

Yuki (Dangerous) is a trap-based character. Her passive permanently converts any

Portable Pudding cards in her hand into

Tragedy in the Dead of Night cards. This can be a large advantage, as Tragedy in the Dead of Night can be a very powerful card capable of swinging momentum on its own, and Yuki (Dangerous) is the only one on the board able to get the card as others will only draw it as their respective pudding card. Her Hyper also allows her to draw and place Trap cards at a faster pace than other characters.

Her downsides are that she is unable to get wins from encounter enemies. This means she may miss out on quicker Normas, especially in the early game. Her Hyper is also able to place traps in less than ideal locations where other players are unlikely to step on.

Pros
+Passive allows for stacking the deck in the player's favor
+Above-average stats
+Hyper helps Yuki (Dangerous) draw more traps to place.
Cons
-Hyper is unreliable at placing both where traps go and what kind of traps you set.
-Performance can vary from board to board