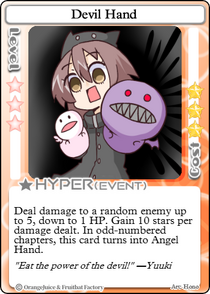 Deal damage to a random enemy up to 5, down to 1 HP. Gain 10 stars per damage dealt. In odd-numbered chapters, this card turns into Angel Hand.
Hyper Info
Effect Type
Event
Level
3
Cost
30 ★
Symbol
[[File:|30px|link=]]
Illustrator
Hono
"Eat the power of the devil!" ―Yuuki

In Co-op mode, Yuuki's stats and passive do not change.

Yuuki's main Hyper, Angel Hand, does not visibly change in Co-op, but has a slightly different effect. The Hyper can only target players and not enemies, but otherwise functions the same as in Normal mode.

Yuuki's secondary Hyper, Devil Hand, has a different effect in Co-op. When used, one random non-KO'd enemy will instantly take 5 damage. If the enemy's current HP is 5 or less, the enemy will instead take damage equal to their current HP minus 1, leaving the enemy at 1 HP. The player gains 10 stars for each point of damage dealt through this effect. On all odd-numbered chapters, this card will transform into Angel Hand.

Yuuki's passive and Hyper are unchanged in Bounty Hunt mode.

Yuuki's base stats give her 44 starting stars and a discount of -10% at shops.